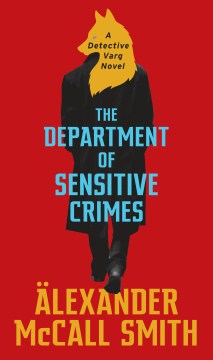 *Starred Review* McCall Smith, famed for his No. 1 Ladies' Detective Agency series, set in Botswana, now extends his gift for comic situations and insightful commentary to a projected series set in Sweden—"Scandi-Lite," his publisher has dubbed it, in contrast to the bleakness of Scandinavian noir, but the hook sells McCall Smith short. While there's a great deal of humor here, this isn't as lite, say, as cozy series set in a knitting shop. It's true that the Department of Sensitive Crimes is a catchall agency for crimes that the police in Sweden's Criminal Investigation Authority consider either too minor, too weird, or too annoying to deal with. But, as in the No. 1 Ladies' series, McCall Smith uses these cases to shine a revealing light on human nature, including the foibles and heartaches of the investigators. The department is headed by Ulf Varg (both names mean "wolf" in Swedish), who is a bit of a lone wolf himself. Ulf and his investigators in Malmö, the third largest city in Sweden, investigate three "sensitive" cases over the course of the novel: the stabbing in the knee of a market vendor; the disappearance and suspected murder of an imaginary boyfriend; and various sightings (and hearings) of a werewolf at a Scandinavian spa. The second case is especially fascinating, showing how a lie can expand. Detective Varg promises to be a complex series character, and the department itself looks certain to deliver more oddball yet poignant cases. Copyright 2019 Booklist Reviews.

Wouldn't it be just like the author of the "No. 1 Ladies' Detective Agency" mysteries to offer a gentle parody of the Scandinavian noir defining the crime fiction landscape? Led by Ulf Varg, who considers his cases even more important than his dog's happiness, the Malmö Police's Department of Sensitive Crimes considers a back-of-the-knee stabbing, an imaginary boyfriend's disappearance, and possibly supernatural incursions at the local spa.

Ulf Varg, the lead detective in this appealing series launch from Smith (the No. 1 Ladies' Detective Agency series), works for the Sensitive Crimes Department of the Malmö, Sweden, Criminal Investigation Authority. He and his colleagues, including married Anna Bengsdotter, on whom the divorced Ulf has a guilty crush, investigate minor crimes, such as the nonfatal stabbing of a market vendor in the back of the knee. Ulf easily figures out whodunit, the focus being on why the culprit, basically a decent man, did the deed and his subsequent treatment within the justice system. Another case involves a lonely young woman, Bim Sundström, who invents an imaginary boyfriend, Sixten, to impress others. Complications ensue when Bim claims that Sixten, a medical student, has suddenly left her and gone off to a research station at the North Pole. A third case concerns a purported werewolf, whose nocturnal howls are driving away customers from a resort spa. As usual, the interpersonal relationships Smith so sensitively portrays and the ethical issues he raises matter far more than the sleuthing. Fans of gentle mysteries will look forward to the sequel.