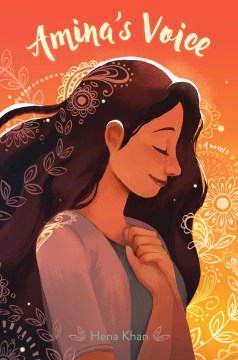 *Starred Review* Amina enjoys spending time with her best friend Soojin and practicing her singing, as long as no one is around to hear her. When Soojin starts talking about selecting a second, more American name when she becomes a citizen, Amina feels she is starting to lose her friend, especially as Soojin starts to befriend classmate Emily and talk about boys. To add to Amina's worries, her parents have signed her up to be part of a statewide Quran recitation competition. While Amina has a beautiful singing talent, she's afraid she won't do well and is searching for a way out. When the Islamic Center is vandalized, however, Amina begins to discover things about her family, her friends, her community, and herself that ultimately help her through her difficulties, in particular, that the support she needs is all around her. The Amina that readers meet at at the beginning of the story—a shy, unsure young girl—gradually and beautifully blossoms into the confident girl she longs to be. Khan gracefully balances portraying the unique features of Amina's cultural and religious background with familiar themes of family, belonging, and friendship worries, which should resonate with a wide range of readers. Written as beautifully as Amina's voice surely is, this compassionate, timely novel is highly recommended for all libraries. Copyright 2017 Booklist Reviews.

Since she started middle school, shy Amina struggles with self-consciousness about her Muslim Pakistani American identity. Meanwhile, her conservative uncle objects to her singing and piano playing, and the local Islamic Center is vandalized. A relatable portrayal of a tween who wants to fit in, and who's devoted to her faith even amid her confusion about her family's varied approaches to it. Copyright 2017 Horn Book Guide Reviews.

Musically talented Amina struggles with shyness and, since she started middle school, with issues of assimilation. Her best friend Soojin, who is Korean American, is considering changing her name with the encouragement of new friend Emily, which leaves Amina feeling self-conscious about her own Muslim Pakistani American identity. Meanwhile, her conservative, traditional uncle, Thaya Jaan, visiting from Pakistan, objects on religious grounds to her singing and piano playing just as she's trying to get up the courage to perform in a school concert. After the local Islamic Center, including the mosque, is vandalized, the text vacillates between believably depicting the shaken-up congregants and spelling out a few too many ideas that readers might otherwise figure out on their own. This first title from new Muslim-focused imprint Salaam Reads is more successful in its depiction of day-to-day interactions, its shifting middle-school personalities and friendships, and its cozily busy community scenes. The result is a relatable portrayal of a tween who wants to fit in, and who's devoted to her faith even amid her confusion about her family's varied approaches to it. shoshana flax Copyright 2017 Horn Book Magazine Reviews.

For musically gifted Amina Khokar, sixth grade heralds a multitude of changes. Her best friend Soojin is about to be granted citizenship and plans to leave her Korean name behind, plus Soojin has befriended another classmate, Emily, whom Amina distrusts. Meanwhile, Amina's family is hosting her strict Muslim great-uncle, who is visiting Wisconsin from Pakistan, and stage-fright-prone Amina prepares to publically read a passage from the Quran in Arabic. The vandalism of the local Islamic Center and mosque further heightens the turmoil in this timely coming-of-age story. Through Amina's emotional, honest responses—betrayed confusion over Soojin wanting an American name, her worry about her uncle's comments that her passion for music is un-Islamic, her dejected disbelief in response to the Islamophobic vandalism—Khan () gracefully addresses the difficulty of reconciling individual beliefs with those of others, especially those you love, as well as the complications that accompany the merging of cultures. Watching Amina literally and figuratively find her voice—bolstered by community, friendship, and discovered inner strength—makes for rewarding reading. Ages 8–12.

From the desk of Zoe WashingtonMarks, Janae

Are you there God? It's me, MargaretBlume, Judy

Other words for homeWarga, Jasmine

The garden of my ImaanZia, F. (Farhana)

A place at the tableFaruqi, Saadia