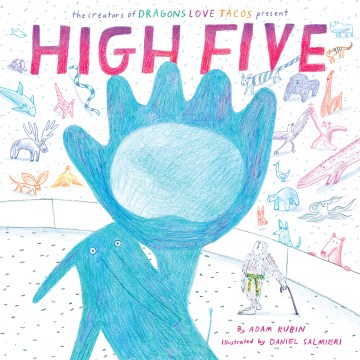 Good news, Dear Reader! Sensei, the retired High Five Champion of the World, thinks you might have the potential to become the first human high-fiver ever! But first, as he explains in lilting, jaunty verse, he needs to test your high-five power. A match against Glen, a rather large elephant, ensues: the reader smacks Glen's huge, page-filling hand. The result? Glen ends up across the room, embedded in the wall. On to the championships! After intensive training (which features increasingly creative hand smacks), the games begin. One by one, the other contestants (including an octopus, which seems like cheating) are overcome by mighty, page-crushing high fives. Glen even puts in an appearance during the semi-finals. Including the cover, the text requires 17 high fives, with a big, bright paw, ready for a good smack, as a target. The rest of the pages are filled with witty, colorful illustrations that capture the thunderous impacts. This new offering from the Dragons Love Tacos team is sure to delight audiences—and should make for lively story times. Preschool-Grade 1. Copyright 2019 Booklist Reviews.

Sasquatch-like narrator Sensei rhymes its commentary for this year's high-five contest and provides occasional tips: "I teach young fivers what to do... / my next apprentice could be you." The story is amusingly meta (the animal judges keep voting for "Kid," a.k.a. the reader), and the art, which resembles an elementary schooler's colored-pencil drawings, is perfect for the as-if-from-a-child's-mind premise. Copyright 2019 Horn Book Guide Reviews.

In this interactive picture book by the team, a high-five champion called Sensei, who resembles Bigfoot and wears a multicolored belt, offers to apprentice readers. It's all to prepare for the annual high-five contest, where, Rubin writes, "high five fans from far and near/ all press their palms against the rest,/ to see whose high five is the best." Spreads invite readers to try out their best high fives, and Salmieri employs forced perspective so that each contestant's slapping hand extends right up to the image's foreground. The narrative arc is relatively straightforward: there's the training, in which the reader apparently makes a very favorable impression; followed by the big competition, which slowly ups the ante; culminating in the reader matching slaps with Octopus Jones ("He has eight hands, you just have two.../ a little uneven, it's true") before the winner is revealed. Although Rubin's rhymes are only serviceable and the plot feels less sturdy than the team's other collaborations, the pictures offer plenty of room to receive readers' high-five innovations, and the pages crackle with Salmieri's neon palette and scratchy, kinetic pencil lines. Ages 3–5. (Apr.)

A pig, a fox, and a boxFenske, Jonathan

Cat the cat, who is that?Willems, Mo

You are (not) smallKang, Anna

But not the hippopotamusBoynton, Sandra