Who killed the Fonz? : a novel / James Boice. 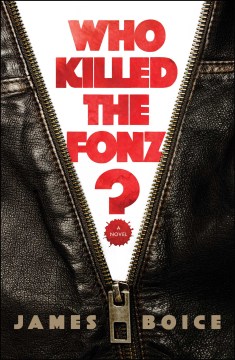 The year is 1984. Richard Cunningham, an Oscar-nominated screenwriter who's in a severe career slump, learns that a man who was once his closest friend has died. He immediately flies back home to Milwaukee to attend the funeral of Arthur Fonzarelli—the Fonz. In this wildly inventive and entertaining novel, Richie Cunningham, Ralph Malph, Potsie Weber, and the Fonz are not characters in a television show called Happy Days; instead, they are real people, 20 years on from the time when they were kids hanging out at Arnold's Drive-In. Author Boice could have played the story for laughs, but instead he goes a different way, adding a mystery. The Fonz, it turns out, has been murdered, and it's up to Richie and pals to investigate. The mystery element is handled with skill, but this is really a kind of delayed-coming-of-age story in which Richie, forced to rediscover his past, learns that sometimes a childhood hero is just another man. A decent mystery wrapped in nostalgia but carrying a surprisingly poignant message. Copyright 2018 Booklist Reviews.

After a cult hit and an Oscar nomination, Hollywood screenwriter Richard Cunningham is struggling. Downcast, he returns to his Wisconsin hometown, where he hears the tragic news that his best friend from Milwaukee, Arthur Fonzarelli was killed in a motorcycle accident. Attending the funeral, now as a 45-year-old, he feels out of place. Old friends Ralph and Potsie sneer because he's gone Hollywood. But Fonzie always understood him. Then a figure who looks like the Fonz appears and drops hints that Richie should check into his friend's death. It might not have been an accident. The TV comedy , which celebrated the 1950s and family life, takes a darker turn in a mystery set in the 1980s. Richie's father is dead, and now with Fonzie gone, a grown-up Richie must face his own mortality and fears about failure, success, and family. The mystery is slight in this book by the author of . However, fans of the long-running will appreciate the familiarity and nostalgia of a story that captures the spirit and atmosphere of the show.

Set in 1984, this nostalgic reboot from Boice () imagines the gang of TV's in middle age. Richard "Richie" Cunningham, one-time Hollywood screenwriting sensation, finds himself at a creative crossroads after a decade's worth of professional setbacks. Struggling to finance his dream project, Richie must decide whether directing a Star Wars rip-off is worth keeping his career alive. Adding to his struggles, Richie learns that his friend Arthur Fonzarelli (aka the Fonz) is missing and presumed dead. The Fonz apparently lost control of his motorcycle while crossing a bridge and plunged into the river below back home in Milwaukee. Richie returns for the memorial service. With the body still missing and lingering questions surrounding the accident, Richie and old friends Ralph Malph and Potsie Weber suspect something more sinister happened and investigate. Notwithstanding some plot contrivances, readers yearning for simpler times will enjoy this trip down memory lane, which is as predictable and comforting as an episode of .

My days: happy and otherwiseRoss, Marion, 1928-

I know you knowMacmillan, Gilly