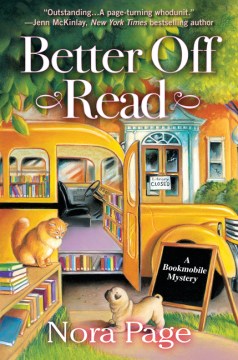 At 75, Cleo Watkins isn't willing to give up her job as head librarian in Catalpa Springs, GA, when the mayor wants to take money that would have been used to repair the library's storm-damaged roof to build a fishing pier and a floating casino. So, Cleo takes to the road in her aging bookmobile, hoping to drum up support for the library. One supporter promises help, but he's also at war with Cleo's best friend Mary-Rose. When Cleo finds Buford murdered, it's easy for the police to blame Mary-Rose. It's going to take all Cleo's guile and research skills to identify the true killer. Page, who writes the "Santa Fe Café" mysteries as Ann Myers, introduces a large cast of quirky characters in a homespun Southern small-town setting. At times it is difficult to distinguish among the numerous personalities, which include Cleo's family, friends, library customers, and assorted cats and dogs. But the bookmobile premise promises more humorous library-related adventures. Fans of Ashton Lee's "Cherry Cola Book Club" series, with the political machinations involving the library, will find this new cozy appealing, as will readers of Laurie Cass's "Bookmobile Cat" mysteries.

When septuagenarian librarian Cleo Watkins of Catalpa Springs, Ga., learns that the new mayor wants to close her storm-ravaged library to fund his high-end fishing pier and floating casino, she takes matters into her own hands, in this funny, fast-paced series launch from the pseudonymous Page. Cleo sets out to rally support for saving the library in Words on Wheels, a yellow school bus turned mobile library. But when someone fatally bludgeons one of the library's major benefactors, an aficionado of true crime books, Cleo enlists the support of friends and family to keep her best friend, Mary-Rose Garland, and her 24-year-old grandson, Ollie, from being implicated in the crime. Page pulls together all the elements needed to sustain a cozy series: an eccentric cast of supporting characters, a potential suitor, a cat named Rhett, a quaint town, great food, and, most importantly, a dynamo of a lead in Cleo, who drives with a lead foot and refuses to back down from anything or anyone, including bullies and murderers. Agent: Christina Hogrebe, Jane Rotrosen Agency. (May)

Word to the wiseMcKinlay, Jenn

By book or by crook: a lighthouse library mysteryGates, Eva, 1951-