The spectators : a novel / Jennifer duBois. 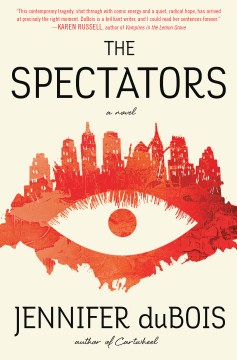 *Starred Review* So who is Matthew Miller, really: an attorney who is a public defender? A politician? A closeted gay? The host of the Mattie M Show, a sensational and sensationally popular afternoon TV program (think Jerry Springer)? Or is he all of the above? Answers are sometimes forthcoming from DuBois' co-protagonists, Semi, a playwright who is Miller's erstwhile lover, and Cel, a young publicist for the show. Semi tells his story in his thoughtful first-person voice, while Cel is remanded to third-person, the novel's action moving back and forth between them. Set in New York between 1969 and 1993, the novel offers a remarkably acute examination of gay life in the 1970s and, especially, in the plague years of the '80s, while inviting speculation about the place of the Mattie M Show in American popular culture. This last is exacerbated when two aggrieved teens responsible for a mass shooting at their high school are revealed to be Mattie M Show fans. What will the fallout of that revelation be? The Spectators is a beautifully written, even aphoristic novel ("promiscuity, like class, is a spectrum on which everybody claims the middle"), but its greatest strength is its characterization: Semi and his gay friends, Cel and her mother and grandfather, and, of course, the always enigmatic Mattie are brilliantly conceived and, like the novel in which they star, utterly unforgettable. Copyright 2019 Booklist Reviews.

Talk show host Matthew Miller chronicles a flailing, failing society by revealing the unsavory secrets of others on live TV, but no one knows much about him until high school students responsible for a mass shooting are revealed to be big fans and his own secrets as a rising young politician in New York City are spilled. From a National Book Foundation 5 Under 35 honoree and a PEN/Hemingway and NYPL Young Lions finalist.

What causes a socially conscious public defender and burgeoning New York City politician to reinvent himself as the crass host of a reality television program designed to showcase our basest instincts? And what do we make of the 16 million spectators who thrill to the staged fights and tearful confessions on ? DuBois () takes readers on a trip from the late Sixties gay liberation movement, through the AIDS scourge in the Eighties, to the Nineties, when a mass school shooting still had the power to shock. Two narrators, Semi, a gay playwright and Matthew Miller's former lover, and Cel, Mattie's hapless publicist, attempt to unravel the mystery of the man whose public persona differs wildly from his private one. Dubois's writing is most powerful when channeling Semi, who rages against the disease that decimates the gay community, lamenting the exhaustion of caregiving, the weight of grief, and the resentment toward those who, like Mattie, are spared yet stay silent. Only years later, when fans of Mattie's show are blamed for an act of violence, will he take a stab at redemption. A Whiting Award winner and Pen/Hemingway nominee, duBois writes an especially timely novel exploring the power of the media to foment chaos and the culpability of the public that validates the discord by watching. [See Prepub Alert, 10/8/18.]

DuBois () spans some 30 years of New York City history, moving between the queer gestalt of the 1970s and the television-junkie culture of the 1990s in her solid third novel. The story revolves around Matthew Miller, a sensationalist Jerry Springer–like talk show host who becomes the target of unwelcome media attention following a high school shooting whose perpetrators turn out to be fans of his . Readers follow Mattie's put-upon publicist Cel as she navigates a treacherous landscape of scandal and recusal. But as the skeletons in Mattie's closet begin to emerge, readers become privy to the story of Semi Caldwell (who narrates a portion of the book), his secret past lover, when "Mattie" was simply Matthew, an upstanding lawyer and would-be politician in the heady days of Stonewall, before AIDS ravaged the gay community in the 1980s. As the story cuts between eras, the media circus that precipitates Mattie's fall from grace comes to mirror his abandonment of Semi, who eventually shows up at his TV studio looking for answers. DuBois beautifully handles Semi's half of the novel, told in first person, but the third-person Cel sections, in which she plays detective to piece together Mattie's past life, lack the power of Semi's. Though somewhat uneven, this is nevertheless a powerful novel.