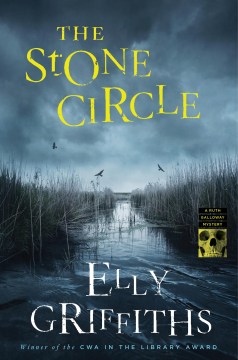 This is the eleventh Ruth Galloway novel (after The Dark Angel, 2018) from the award-winning Griffiths, who is consistently very canny about conveying the uncanny. She always involves an element of the supernatural in her plots—so appropriate to her setting in marshy East Anglia, a place that seems not quite earth, not quite sea—and this time around, it appears that forensic archaeologist Ruth and DCI Nelson are being haunted by a ghost from their past. Or so it seems when they receive threatening letters reminiscent of earlier missives from their first case together (The Crossing Places, 2009). But dead men don't write letters. Or do they? With plenty of warmth to counter the eeriness, all the usual distinctive characters—with a new addition who is quite the surprise—pass their daily lives in delightful detail as the investigation wears on. Griffiths' fans who reach each of her inevitably complex endings wishing for still more will be pleased with a note in her acknowledgments: "I don't think I have nearly exhausted all the myths and legends of East Anglia, let alone its archaeological wonders." See ya soon, Ruth! Copyright 2019 Booklist Reviews.

Forensic archaeologist Ruth Galloway is called in to consult when modern bones are found on a dig site. DCI Harry Nelson takes the case and the remains are identified as belonging to 12-year-old Margaret Lacey, who went missing in 1981. The lead suspect at the time was an odd local man named John Mostyn, but after Margaret's body is recovered, Mostyn is shot once through the heart and his body left in an office park. Meanwhile, Nelson's wife, Michelle, has had their baby, and made a friend, Star, at a mother-and-baby group. When Star's baby disappears from her home without a trace, Nelson and his team get involved in that case as well. In the meantime, Nelson receives letters that sound very much like those he got during the first case Ruth worked with him—but the man who wrote those letters is dead. Fans of the series will be delighted to catch up with Ruth and Nelson as the mysteries wind their way to satisfying solutions. [See Prepub Alert, 11/5/18.]

Mary Higgins Clark Award winner Griffiths's enticing 11th mystery to feature forensic anthropologist Ruth Galloway and her married lover, Det. Chief Insp. Harry Nelson of the King's Lynn CID (after 2018's ), harkens back to their first case together, when they investigated missing girls near the Norfolk marshes and conceived their now seven-year-old daughter, Kate. Anonymous threatening letters sent to Nelson appear to be from the person who led the pair into that first case, Ruth's mentor and later antagonist. The discovery of the bones of 12-year-old Margaret Lacey, who disappeared in 1981, in an archeological dig, raises the stakes. Series fans should enjoy echoes of Griffiths's debut, 2009's , and the roles played by Det. Sgt. Judy Johnson and her police partner, Maddie, in seeking Margaret's killer. Meanwhile, Nelson's pregnant wife prepares to deliver a child who may or may not be his. The continuing lack of resolution in Ruth and Nelson's relationship may wear on even the most patient readers. Still, fans of forensic mysteries will find plenty to like.

In the bleak midwinterSpencer-Fleming, Julia
Fellowship of fearElkins, Aaron J.

In a dark houseCrombie, Deborah