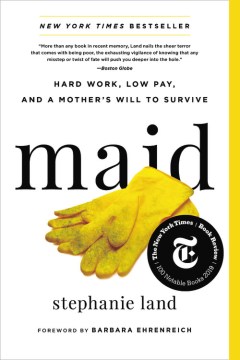 Land's memoir of single motherhood and poverty gives a personal account of the factors influencing those issues. An unplanned pregnancy ends Land's dream of attending college in Missoula, Montana. An abusive boyfriend (soon to be ex-boyfriend), parents that aren't financially or emotionally able to be supportive, and a lack of a social network further conspire against her until she and her young daughter find themselves living in a homeless shelter. What follows is a series of woefully low-paying, back-breaking jobs; attempts to navigate complicated and inadequate government assistance; and scenes of public shaming for "handouts. Land's honest writing, especially about her feelings of inadequacy, and her insights into the people whose homes she cleans are beyond engaging. Readers will understand working hard while simultaneously fearing that if one thing goes wrong, if one unplanned expense rears its ugly head, if one benefit doesn't come through, a delicate balance could be completely upended.? For readers of Barbara Ehrenreich's Nickel and Dimed (2001), Matthew Desmond's Evicted (2016), and Sarah Smarsh's Heartland (2018). Copyright 2018 Booklist Reviews.

In this BookExpo Buzz book, Land lets us into the lives of America's overburdened, underpaid domestic workers, relating what it's like to put in long hours scrubbing toilets and cleaning up the messes of well-to-do children while struggling as a single mother to support her own daughter. Then there's the sticky red tape of government assistance. Her writing stems from a 2015 essay on housecleaning that went viral. With a foreword by Barbara Ehrenreich; a 75,000-copy first printing.

Writer Land's vivid and visceral yet nearly unrelenting memoir covers three dark years in the life of a single mother raising her young daughter, Mia, on the unlivable wages that come with the physically and emotionally grueling work of contract housekeeping. With family who are unable to help and a contentious relationship with Mia's abusive father, Land determines to make a life for herself and Mia on her own. Through work as a maid and occasional government assistance, she scrapes by, but at the cost of her health and dignity. Most of the chapters are named for the homes Land cleans, identified by a dominant attribute ("the porn house," "the sad house"), and signifying the unusual intimacy of a nonrelationship between householder and the person who cleans up after their domestic behavior. Unfortunately, Land's personal narrative does not extend or speak to the larger realities of poverty and single motherhood, particularly for women of color. And while Barbara Ehrenreich () provides an interesting foreword, it doesn't help enough to widen the book's lens. Land has perhaps succeeded in having her story told by virtue of her eventual triumph in escaping the grind of poverty. Her journey offers an illuminating read that should inspire outrage, hope, and change.

In her heartfelt and powerful debut memoir, Land describes the struggles she faced as a young single mother living in poverty. "My daughter learned to walk in a homeless shelter," she writes, before chronicling her difficult circumstances. Land got pregnant at 28, then left an abusive relationship and went on to raise her daughter, Mia, while working as a part-time house cleaner in Skagit Valley, Wash. Later, using public assistance, Land moved to a moldy studio apartment and got her daughter into daycare. While housecleaning, Land imagines the lives of the clients, whom she knows intimately through their habits and possessions (their apparent unhappiness despite financial comfort fosters compassion as well as gratitude for her own modest space), and experiences the humiliating stigma of being poor in America ("You're welcome!" a stranger snarls at the checkout as she pays with food stamps). Even while working, Land continued to follow her dream of becoming a writer. She began a journal and took online classes, and eventually attended the University of Montana in Missoula. Land's love for her daughter ("We were each other's moon and sun") shines brightly through the pages of this beautiful, uplifting story of resilience and survival.

Nickel and dimed: on (not) getting by in AmericaEhrenreich, Barbara

This is all I got: one woman's desperate year in the new gilded ageSandler, Lauren

Behind the beautiful forevers: life, death, and hope in a Mumbai undercityBoo, Katherine