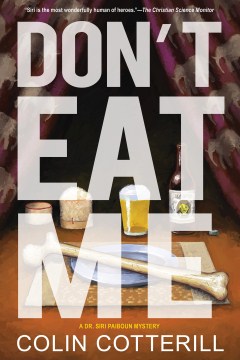 *Starred Review* Zany isn't the first word that springs to mind when you think of murder mysteries, but CWA Dagger in the Library winner Cotterill's series about Dr. Siri Paiboun, the former national coroner of Laos, set mainly in Laos but also in Thailand and at the 1980 Olympics in Moscow, expands the boundaries of mystery fiction into a heady brew of Communist-oppressive noir and magical realism. Regarding the latter, Siri is haunted and annoyed by a series of spirits, a fact that is expressed in a deliciously deadpan manner. In this thirteenth in the series, the action opens with Siri and a buddy returning from Thailand by boat with a movie camera used to shoot The Deer Hunter. They intend to film, without knowing how to operate the camera, a Laotian version of War and Peace. Meanwhile, a young woman's skeleton has been discovered in the middle of the town square; what bothers the investigators—and Siri, as he becomes drawn into the case—is the strong suggestion that the flesh was physically eaten away. Watching Siri and his indomitable wife, Madame Daeng (who runs the best noodle shop in Vientiane), fight bureaucrats with guile is wonderful in itself. Add to that a plot that keeps deepening, riotously comic schemes and encounters, and the vividly realized atmosphere of life in late '70s and early '80s People's Democratic Republic of Laos, and you have something remarkably deep—and, yes, quite zany. Copyright 2018 Booklist Reviews.

The 13th entry in Cotterill's popular series (after ) sees Siri, the former national coroner of Laos, married and settled down and ready to make a film using a camera that he and his longtime friend Civilai have smuggled across the Mekong River. But when a woman's skeleton is found, Dr. Siri must marshal his group of dedicated friends, plus the loyal customers of Madame Daeng's noodle house, to identify the murderers. In the process, more killings are discovered—not human ones, but those of wild animals taken under cruel conditions to other countries for zoos and medicinal uses. Into this complicated mix comes the slow realization that Judge Haeng may be in some way involved. Cotterill uses subtle humor and historical fact to write a compelling mystery in which marginalized people (the elderly, the mentally challenged, etc.) are integral characters. Fans of Alexander McCall Smith and Boris Akunin will enjoy this gently ironic series. Definitely recommended for its inclusive characters, humor, and a thought-provoking ending. [See Prepub Alert, 12/11/17.]

In Cotterill's excellent 13th mystery, set sometime after 1980 in the People's Democratic Republic of Laos (after 2017's , Dr. Siri Pauboun, the country's national coroner, and his friend Chief Insp. Phosy Vongvichai, who's a rare honest cop, have a grisly murder to solve. A night patrol has found a skeleton at the base of the Anusawari Victory Arch belonging to a woman who was apparently eaten by animals, possibly while she was still alive. The sensitive inquiry implicates a powerful official, placing Phosy's career and life at risk. The crime may also be connected with illegal animal trafficking. A subplot involving Siri's plans to produce a film based on —and his navigating of the bureaucracy to get the project green-lit—provides comic relief from what would otherwise be a grim tale. Wry prose ("Life sped by in Vientiane like a Volkswagen van on blocks") also lightens the mood. The eccentric Siri, who's possessed by spirits (including those of a dog, his dead mother, and a transvestite fortune-teller), continues to stand out as a unique and endearing series sleuth.