Throw me to the wolves / Patrick McGuinness. 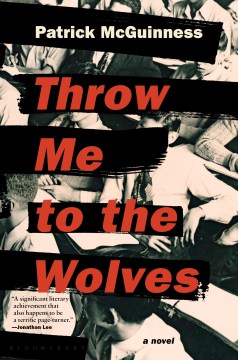 Oxford don McGuinness mixes mystery with reflection in his second novel (following The Last Hundred Days, 2012, which was long-listed for the Man Booker Prize). The title hints at the wonderfully unsettling quality of this mystery. The "wolves" can refer to predatory men targeting young women, police skewing an investigation for a quick conviction, the rapacious media with a good story in its jaws, or even the bewildering tricks memory can play. Detective Ander is assigned a case involving a brutally murdered young girl. The suspect is Mr. Wolphram (the first wolf reference), now retired, who was one of Ander's teachers at a posh English boarding school 30 years earlier. The case sickens Ander, as do his memories, both insistent and blurry, of institutionally approved abuse and the disappearance of his best friend from the school. McGuinness' portrayal of the British media hounding the suspect builds brilliantly. The story is told from Ander's point of view, which is both fascinating and annoying, since Ander is so prone to reflection. However, the overall effect packs a decidedly noirish punch. Copyright 2019 Booklist Reviews.

An Oxford professor whose debut novel, , was long-listed for the Man Booker Prize, McGuinness returns with a literary crime novel. When eccentric teacher Mr. Wolphram is suspected of murder, former student Ander investigates, recalling the best friend who vanished from their elite school when IRA terror was in full swing.

A young girl is strangled on the banks of the Thames, her dismembered body stuffed in bin bags. The prime suspect is a former teacher at the elite Chapelton College. He's savaged in the press, as well as on social media. Ander, one of the detectives assigned to the case is an "old boy" of the college who remembers the teacher. The story unfolds in two strands, one detailing the media frenzy, the other with the detective's memories of his time at the school in the 1980s with its rampant bullying and political and social troubles. McGuinness settles on what might be the perfect metaphor for his grim portrait of British society, a fatberg, that sewer-blocking, congealed, pulsating body of greasy detritus wrapped around discarded personal hygiene items and garbage bags. Familiar plot elements are reinvigorated by McGuinness (a prize-winning poet and author of a previous novel, , longlisted for the Man Booker Prize), his piercingly acute descriptions and telling sense of detail. This novel has the touch of a flayed poet about it, and that's meant in the best sense. [See Prepub Alert, 10/8/18.]

In this cerebral, if less than exciting, procedural from British author McGuinness (), police officers Ander Widderson and his crude, quipping partner, Gary, look into the murder of a young woman whose body was discovered under a bridge in South East England (and about whom the reader learns nothing of consequence). The prime suspect, retired teacher Michael Wolphram, taught at Chapleton College when Ander attended the exclusive boarding school back in the 1980s. Ander's reminiscences about his time as Wolphram's student and the disappearance of his best friend, Danny, from the school provide counterpoint to the present-day investigation. The relationship between Ander and Gary, and that between Ander and Danny, come across with appealing tough-guy tenderness. But McGuinness's choice to center the media's frenzy to scapegoat Wolphram on individual manipulative reporters in print, and not on populist social media, seems quaintly out-of-date. Between musings on the conflict between media coverage and truth, the narrative often feels overly introspective and tensionless, while also failing as social commentary.

The truth about the Harry Quebert affairDicker, Joel, 1985-