If she wakes / Michael Koryta. 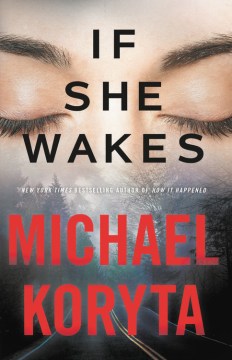 Escorting visiting professor Dr. Amandi Oltamu around Hammel College's campus was the strangest student-ambassador assignment Tara Beckley had ever undertaken. Oltamu was jittery, and, after they shared an awkward selfie, he pleaded with her to lock his phone in her glove compartment. Seconds later, a van slammed into Tara's car, killing Oltamu and leaving Tara comatose. Tara awakens in the hospital gripped with fear as she realizes she's trapped in her body, fully aware but unable to respond. Abby Kaplan, a former stunt driver turned insurance investigator, suspects the collision was an intentional attack when she realizes that the damage to Tara's car contradicts the van driver's story. Unable to interview Tara, Abby searches Tara and Oltamu's phones for clues to the killer's possible target. Unfortunately, a young hit man aiming to prove his worth is also after Oltamu's phone, and Abby will have to tap into her guilt-laden past to defend herself and Tara. Instantly gripping, with realistic action, a breath-snatching twist, and a few untied ends that hopefully signal a sequel. Copyright 2019 Booklist Reviews.

A terrible car crash kills the engineer Tara Beckley is escorting on campus and leaves Tara herself unable even to twitch but aware that someone wants her dead. Meanwhile, insurance investigator Abby Kaplan realizes that this was no accident. With a 100,000-copy first printing.

The latest from best seller Koryta (after ) brings readers along as college student Tara Beckley drives a visiting professor, who is in possession of a valuable phone, to her campus in Maine. Tara's car is struck violently, and she is sent into a coma while her passenger is killed. Tara's condition is diagnosed as locked-in syndrome, which means she's fully alert but unable to move or communicate. Meanwhile, insurance investigator and former stunt car driver Abby Kaplan is sent to check out the collision site. She sees immediately that the driver who caused the incident lied about the events. Soon, the driver turns up dead, and it seems that a killer named Dax Blackwell (whose father and uncle were introduced in ) is hunting for the phone, which was lost during the initial accident. Dax is trying to be as deadly as his father and even more cunning. Abby will need to face her fears to figure out where the phone is and how to get the information from Tara, who is trapped in her own body. Fans of Koryta's previous works, especially , will greatly enjoy this exciting story. [See Prepub Alert, 11/12/18.]

At the start of this taut thriller from bestseller Koryta (), the car in which Tara Beckley, a student at Maine's Hammel College, was driving Professor Amandi Oltamu before they parked on a bridge is struck by a car driven by Carlos Ramirez. Oltamu, who was on his way to deliver the keynote address at a talk related to his work on batteries and solar panels, is killed, and Tara ends up paralyzed, conscious but unable to communicate. Insurance investigator Abby Kaplan, who's employed by Hammel, probes the fatal collision. Why Tara chose to stop on a bridge nowhere near her destination is a puzzle. College officials are hoping to avoid any liability for Oltamu's death and Tara's injuries, a prospect that seems likely when Ramirez admits to having been on his cellphone at the time of the accident. But when Ramirez is shot to death, Abby begins to suspect that something more sinister is at work than distracted driving, and that Tara may have some answers. Adept at creating Hitchcockian moments, Koryta keeps the suspense high throughout. Agent: Richard Pine, Inkwell Management. (May)

When I wake upJarlvi, Jessica