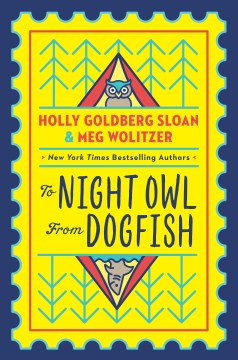 Two popular writers team up for a Where'd You Go, Bernadette–esque tale for the middle-school set. An entire country lies between anxious New Yorker Avery Bloom and adventurous Bett Devlin, but there's something powerful connecting them: their dads are in love. At first horrified at the prospect of becoming—gulp—sisters, the two surprise themselves by bonding at a summer sleepaway camp while their dads motorcycle their way across China. But when their dads' relationship sours, they're willing to do whatever it takes to get them back together. Even if the target readership eschews email these days, they'll be hard-pressed not to be laughing out loud at the witty, clever email and letter repartee among the girls, their dads, and the rest of the supporting cast. Though the story lacks the emotional depth of more true-to-life novels dealing with blended families, such as Olugbemisola Rhuday-Perkovich and Audrey Vernick's Naomis Too (2018), its escalating stakes and Parent Trap–like setup is sure to appeal to both authors' fan bases. Alternately heartwarming and hilarious. Grades 5-8. Copyright 2019 Booklist Reviews.

As this believable epistolary (via email) novel begins, twelve-year-olds Bett and Avery are strangers (and adversaries) thrown together at sleep-away summer camp by their bi-coastally dating fathers. The girls gradually become friends--even as their dads are breaking up. [cf2]Parent Trap[cf1]type shenanigans ensue, but the story's main focus is the strength of chosen family. The warmth of the characters' interactions, including the girls' witty banter, is emotionally satisfying. Copyright 2019 Horn Book Guide Reviews.

At the start of this epistolary (via email) novel, twelve-year-olds Bett Devlin, an adventure-loving California girl of African American and Brazilian descent, and Avery Bloom, a tightly wound New Yorker whose single father is Ukrainian Jewish, are strangers (and adversaries) about to be thrown together at sleep-away summer camp. Their fathers are semi-secretly, bi-coastally dating, and they want their daughters to get to know each other while they themselves are vacationing in China. The girls are resistant, especially set-in-her-ways Avery, but they gradually become non-enemies and then friends and then actually psyched to become sisters, keeping up their correspondence even after camp ends (spoiler alert: they get kicked out). But while Bett and Avery are busily planning a wedding, their dads—whose misadventures in China are humorously detailed—are breaking up. Some Parent Trap–type shenanigans ensue, but the story's main focus is the strength of chosen family. Sloan and Wolitzer nicely differentiate their protagonists' voices, making the emails believable even while the girls are seeing each other every day at camp. Occasional missives from well-drawn supporting players (the dads, Bett's personality-filled grandmother, Avery's back-in-the-picture birth mother) deepen the characterizations while further entwining the two families. Although the secondary storylines are somewhat farfetched, the warmth of the characters' interactions, including the girls' witty banter ("You and I are now the Romeo and Juliet of friendship. Only we're the Juliet and Juliet"), is emotionally satisfying. elissa Gershowitz March/April 2019 p 90 Copyright 2019 Horn Book Magazine Reviews.

Peeking at her father's emails, 12-year-old Californian Bett learns two pieces of upsetting information: her father has fallen in love with a man she's never met, and the two of them are scheming to send Bett and the man's 12-year-old daughter, Avery, away to summer camp together. Furious, Bett finds Avery's email address to break the horrible news. The girls vow not to speak to each other during the summer, but despite their differences (Bett is spontaneous and adventurous; Avery is bookish and fearful), they form a strong bond. When their fathers part ways during a disastrous trip to China, the girls, who had been looking forward to being sisters, are determined to find a way to reunite them. Written entirely in emails and letters, this laugh-out-loud novel showcases the collaborative skills of bestselling authors Sloan () and Wolitzer (). In addition to the two distraught protagonists, the authors create several other unforgettable characters, including Avery's estranged biological mother and Bett's feisty grandmother. Featuring a dramatic climax and a host of surprising twists, the novel affirms that families conventional and unconventional are families just the same. Ages 10–up. (Feb.)

The list of things that will not changeStead, Rebecca

The pages between usLeavitt, Lindsey