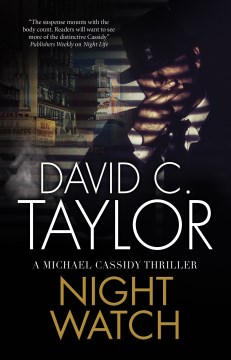 NYPD detective Michael Cassidy, the cynical WWII vet who went a different way from his Upper East Side theatrical father, returns in his third adventure (following Night Work, 2016). It's 1956, and the martinis are still flowing at Toots Shor's, where Michael likes to hang out when he's not swilling beer in the Village. Unfortunately, he's doing little of either at the moment, what with the murder of a cab driver, a curious suicide, and the discomfiting fact that someone is trying to kill him, at a moment to be named later. Anyone who's read a crime novel will know that the three cases will be connected, but Taylor comes up with some tantalizing plot strands to provide the linkage, including the use of psychedelics by the CIA to induce mind control. This remains a solidly constructed, satisfyingly old-school hard-boiled series, distinguished by its loving and vivid evocation of '50s New York. This time Taylor even takes a page out of Guys and Dolls, with a spot-on description of early-morning Times Square, a couple of deals before dawn, as Frank Loesser would have it. Copyright 2019 Booklist Reviews.

In 1956, New York City police detective Michael Cassidy handles a series of Cold War-related investigations while trying to discover who is attempting to kill him. Before he can even investigate the death of a driver of a hansom cab in Central Park, someone tries to push him in front of a subway train. When a biochemist throws himself through a window in the Astor Hotel, the stories told by several of the man's acquaintances don't add up. As Cassidy, along with a reporter, probes and asks questions, the same people seem to pop up—people with powerful ties to the CIA. What's the connection between a sniper shooting at Cassidy and his brother's disappearance? The police procedural/thriller is a grim story of the CIA's mind experiments with LSD and other drugs administered to unsuspecting subjects from 1953 through the 1960s. While Cassidy may uncover some killers, the government wipes away newspaper stories, and any relations to deaths or killers. Fans of James R. Benn's "Billy Boyle" novels will appreciate this fast-paced, intense story by the Edgar Award-nominated author of and The action-packed account of investigations into the controversial CIA experiments is suspenseful and frightening.

Set in New York City in 1956, Taylor's gripping third thriller featuring Det. Michael Cassidy of the NYPD (after 2016's ) opens with a cold-blooded murder. Late one night, a homeless person follows a married couple, Karl and Magda Brandt, into Central Park. After a heated confrontation, Magda coolly sticks a hat pin into the back of the man's neck and watches him die before she and Karl walk away. At first, the authorities shrug off the death as a possible heart attack. When a chemist throws himself out his hotel room window, his death is pegged as a suicide. As Cassidy looks deeper into the two cases, however, he begins to see a disturbing connection. The relationship between the Brandts and their victim gradually emerges as Cassidy and his reporter friend, Rhonda Raskin, pursue a story at great personal risk that turns out to have its roots in the Cold War. Taylor does a fine job of summoning up a bygone New York with all its fascinating cultural and political shadings. Agent: Lisa Gallagher, DeFiore and Company. (May)

The ghosts of BelfastNeville, Stuart, 1972-

The vigilantesGriffin, W. E. B.