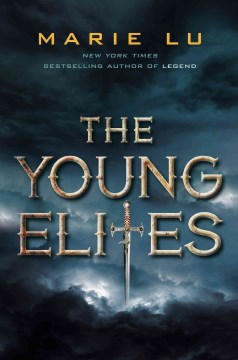 *Starred Review* Adelina Amouteru is a walking wound. A deadly fever has ravaged her country, killing many and leaving others marked in strange and dangerous ways. Adelina is a survivor who carries two marks: once-black hair has turned silver, and her left eye is gone. Known as malfettos, those scarred by the disease are considered bad luck, even dangerous. There are rumors that some survivors have magical abilities, and after a dark confrontation with her power-hungry father, Adelina discovers that the fever may have left her with more than scars after all. Thrust into a group of rebel malfettos, the Young Elites, Adelina realizes the extent of her latent powers. Those familiar with Lu's wildly popular Legend series will recognize the author's propensity to include multiple perspectives, and here those viewpoints include other members of the Young Elites and their rebel leader, as well as the queen's Inquisitor, who is hunting them all. Still, this is Adelina's tale. Part bildungsroman, part origin story, this explores the idea that what damages you gives you strength, but often with a price. Lu's careful world building does slow the plot, but the result is that Adelina's Italianesque culture is believable, and the story leads to a whopper of a finale—and an even more intriguing epilogue. Fans of Legend or not, readers should prepare to be captivated—and to look forward to a continuation of the Young Elites series. HIGH-DEMAND BACKSTORY: A national author tour and promotions at BEA and Comic-Con will help start the buzz for this author, who has already proven she can draw a crowd. Copyright 2014 Booklist Reviews.

In the island kingdom of Kenettra, Adelina is a malfetto, one of the few who survived a blood fever to emerge with otherworldly abilities. Adelina is rescued from the Inquisition by a band of malfettos serving dispossessed crown prince Enzo. Lu's vision of gifted young outcasts is a dark one; several hard-hitting twists will shock readers in this series-opener likely to be a hit.

In the island kingdom of Kenettra, Adelina Amouteru is a malfetto, one of the few who survived a devastating and deadly blood fever to emerge with otherworldly abilities that make them suspect. When Adelina is blamed for her father's death and about to be executed by the Inquisition, she is rescued by the Young Elites, a band of malfettos whose superhuman powers are at the service of Enzo, the dispossessed crown prince, who is trying to win back the throne from his scheming older sister. Adelina's training is going slowly under the tutelage of Raffaele, a beautiful, androgynous consort, but when Enzo takes over, the attraction between herself and Enzo fuels Adelina's efforts. Lu's vision of gifted young outcasts is a dark one, with Adelina (scarred physically by the fever and psychically by her father) drawing her power from fear, anger, and ambition; the other members of the Young Elites are similarly complex, without straightforward loyalties or untainted motives. The darkness extends to the plot as well, with several hard-hitting twists that will come as a shock to unsuspecting readers. Adelina's first-person voice, with her romantic uncertainties and desire for revenge and self-actualization, lands on the current, Mortal Instruments-occupied sweet-spot of current teen vogue, making this series-opener likely to be a hit. anita l. burka Copyright 2014 Horn Book Magazine.

In this series opener, Lu (the Legend trilogy) pivots from the "coming of age via romance" formula to pry apart the many emotions that pass under the rubric of love. Adelina Amouteru, once-privileged daughter of a merchant, is irrevocably changed by the blood fever, an epidemic that wiped out infected adults and left most child survivors permanently scarred malfettos. A handful also underwent mutations that conferred strange, often lethal powers. All malfettos are persecuted, but these mutant Young Elites are special targets. Harrowingly, Adelina discovers that she is one. Rescued by a masked firebrand from certain death under the government's Inquisition, she awakens in the custody of Raffaele, a male prostitute, and Enzo, malfetto aspirant to the throne. A beautiful woman surrounded by beautiful men, Adelina nevertheless is not defined by romance. Warped family bonds shape her consciousness and yearning for acceptance, and the men are out to get what they want from her. There's nothing easy here, for Adelina or readers—there are no safe places where the pressures of betrayal, death threats, and rejection aren't felt. Ages 12–up. Agent: Kristin Nelson, Nelson Literary Agency. (Oct.)

Children of blood and boneAdeyemi, Tomi

An ember in the ashesTahir, Sabaa