The confessions of Frannie Langton : a novel / Sara Collins. 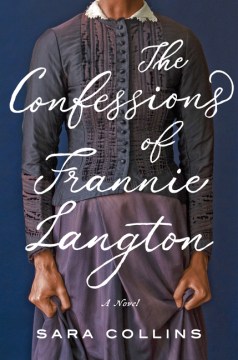 In her historical first novel, Collins, a lawyer and prize-winning writer of Jamaican descent, introduces Frances Langton, whose life traces a trajectory from mulatta slave in the West Indies to maid for a member of Georgian high society to the Old Bailey via incest, horror, and murder. Collins' prose, awash in a sea of similes that threatens to drown the reader, is nevertheless effective in creating a vivid voice for Frannie's first-person narration while providing a convincing sense of place in her depiction of a Jamaican sugar plantation and its inhabitants. There are many monsters here and no heroes, with men "made loose by balls and bragging, with no earthly notion how tight it can get inside a woman's skin." Collins throws various genres into a literary blender to produce a heady, gothic, mad-scientist, bildungsroman, lesbian, feminist portrait of a marriage; slave narrative; and upstairs-downstairs murder-mystery and courtroom-drama smoothie. Fans of any of these elements will be drawn to this absorbing novel of a woman boxed in by geography, chronology, gender, and the color of her skin. Copyright 2019 Booklist Reviews.

Accused of murdering her employers in Georgian London, Frannie Langton recalls nothing about the event but everything about her childhood on a Jamaican plantation and apprenticeship with an ethics-breaching scientist. A debut from a Michael Holroyd Prize winner; with a 50,000-copy first printing.

DEBUT Awaiting trial in 1826 for the murder of scientist George Benham and his French wife, Marguerite, Frannie Langton shares her story. Born in Jamaica, mixed-race Frannie is taken from the slave quarters to serve the plantation's mistress, who treats her cruelly. Learning to read enlarges Frannie's world but also allows her to record the master's experiments—cranial measurements, cadaver dissections, forced mating—to prove black people's inferiority. After Mr. Langton takes her to London to serve Benham in the hope the scientist will endorse his work, Frannie attracts the attention of the eccentric Marguerite, eventually becoming her lady's maid and lover, while trying to control Marguerite's opium addiction. Cast out temporarily, Frannie survives by catering to white men's masochistic fantasies in a notorious brothel. Her return culminates in the Benhams' deaths, although she cannot remember the events. Interspersed throughout the narrative are sections from Benham's journals, witness statements, and letters. But Frannie's powerful, painful recollections will haunt readers as she dredges memories twisted by abuse, violence, and drugs and tries to convince herself of Marguerite's devotion. This dark, disquieting story may appeal to historical fiction fans with a penchant for the gothic. [See Prepub Alert, 11/11/18.]

Collins's debut is a powerful portrayal of the horrors of slavery and the injustices of British society's treatment of former slaves in the early 1800s. Frannie Langton lives as John Langton's slave in Jamaica from 1812 until 1825. When the harvest burns, ownership of the land reverts to Langton's wife and her brother, and Langton returns to London with Frannie. Once in London, he gives Frannie as a servant to fellow scientist George Benham and his wife, Meg, a woman intrigued by Frannie and the breadth of her education. Benham asks Frannie to spy on Meg, whom he thinks might do something to embarrass him socially; meanwhile, Frannie and Meg become lovers. But when Benham and Meg are murdered, Frannie is arrested. She claims no memory of the crime, and a good defense seems unlikely both because of her race and her spotty memory. Frannie's dislike of Benham, her jealousy of his relationship with Meg, and memory gaps caused by Frannie's use of laudanum add to the reader's uncertainty of her involvement. This is both a highly suspenseful murder mystery and a vivid historical novel, but best of all is the depiction of Frannie, a complex and unforgettable protagonist. This is a great book sure to find a wide—and deserved—audience.