This storm : a novel / James Ellroy. 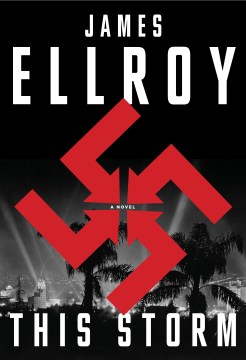 The second volume of Ellroy's second L.A. Quartet picks up where Perfidia (2014) left off, on New Year's Eve 1941, and begins a chaotic 1942 with a plot so convoluted readers will be grateful every time characters restate the facts. Elmer Jackson, Dudley Smith, Joan Conville, Hideo Ashida, and Kay Lake all reappear, along with a dizzying constellation of characters from other Ellroy novels and real life. The key cases are a 1931 gold heist, a 1933 Griffith Park brush fire, and a contemporary killing in which two bent cops are among three victims in a seedy party pad. Do they all connect? And, if so, how? As the characters work angles to seek gold, power, revenge, or even justice, alliances form, twist, and break against a backdrop of war profiteering and fifth-column activity. A deeper theme, utterly timely given the real-world rise of the strongman, is authoritarianism: swastika pins and uniform fetishes signal cabals of Nazis, Communists, and Sinarquistas (Mexican fascists). If, at some point, most of the characters seem to speak like Ellroy, or maybe his grandiloquent Smith, it's somehow appropriate, plunging us ever deeper into a fevered secret history that could have been dreamed by nobody else. Relentlessly compelling.HIGH-DEMAND BACKSTORY: A 60,000-copy first printing in some ways belies intense media interest in Ellroy; his first novel in five years is a major literary event. Copyright 2019 Booklist Reviews.

MWA Grand Master Ellroy's stunning sequel to 2014's opens in Los Angeles on New Year's Eve 1941. Anti-Japanese hysteria has reached a fever pitch and shifting alliances of left-wing and right-wing groups struggle to work out the best way to profit off the war. Dudley Smith, a police sergeant, has taken an Army commission south of the border, ostensibly to thwart Fifth Column pro-Nazi subversives and suspected Japanese submarine encroachments in Baja, but in reality to set up a lucrative wartime business smuggling heroin and illegal immigrant labor. Meanwhile, the L.A. police uncover a body in Griffith Park. Brilliant forensics expert Hideo Ashida, assisted by a talented young scientist with secrets of her own, must grapple with his devotion to Smith and his own conscience as he begins to piece together an intricate story involving a decade-old gold heist and a lethal fire in the park. As Smith squares off against Bill Parker, an LAPD captain on the rise, things get complicated and ugly very quickly. Just when it seems that things couldn't get darker, Ellroy peels back a deeper level of corruption. This obsessive, wholly satisfying probing of 20th-century American history deserves a wide readership. Agent: Nat Sobel, Sobel Weber Assoc. (June)

Detroit is our beat: tales of the four horsemenEstleman, Loren D.

Ruins of warConnell, John A.