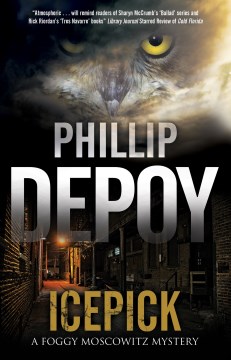 Foggy Moscowitz is a child protective officer in Fry's Bay, Florida. It's 1976, and Foggy's old pal Sammy "Icepick" Franks, a notorious hit man, leaves his mark on the little burg when he dumps a body in the bay. Foggy is called in because the two witnesses are both kids from the nearby Seminole reservation; they're in Fry's Bay looking for their mother, a maid, who has disappeared. Foggy decides to help the kids find their mother, but, since other maids have also disappeared, he suspects a trafficking ring preying on Native Americans. Though Foggy's on the right side of the law these days, before he arrived in Florida, he was on the lam from his native Brooklyn, where he was comfortable with a handful of felonies. Soon Foggy learns the body fished from the bay may be an old friend from Brooklyn. Has Foggy's old life traveled down the Eastern Seaboard? Now he's trying to deal with finding the kids' mom and figuring out what Brooklyn hit men are doing in town. DePoy is an Edgar winner, and the third entry in the Foggy series is a suitably quirky, moody, and often funny noirish exercise. Copyright 2018 Booklist Reviews.

It's the 1970s, and former Brooklyn car thief Foggy Moscowitz now works for Florida's Child Protective Services. In his third adventure (after and ), he helps two Seminole children, Sharp and Duck, whose mother hasn't returned home for three days. When Foggy investigates further, he learns that 27 other women from the same Seminole tribe, all employees of the ritzy Benton Inn, have disappeared. He tracks the women to an abandoned bakery, only to find Sharp beaten and in a coma. Foggy sets out for New York City and then Oklahoma with John Horse, a legendary Seminole. The trail becomes a complicated mess involving Foggy's old criminal connections in Brooklyn, crooked cops, fake FBI agents, census fraud, kidnapped women, and Seminole history and legends. Driven by the flawed Foggy, DePoy's unconventional mystery combines fast-paced, violent action with dark humor. The atmospheric, open-ended story will appeal to fans of gritty crime drama and David Grann's nonfiction best seller

Set in 1976, Edgar-winner DePoy's amusing third Foggy Moscowitz mystery (after 2017's ) finds the Brooklyn-born former car thief and current director of Child Protective Services in Fry's Bay, Fla., answering an early morning police call to come to the docks, where a dead man has been hauled out of the water. Foggy's job is to interview two Seminole children—Duck, a boy of around eight, and Sharp, his slightly older sister—who spotted the body floating in the bay. Foggy befriends the kids, who are looking for their missing mother. At one point, Sharp tells Foggy: "We're the only ones in the Panther clan with our unique... abilities. Duck can track. And I can kill." Foggy begins a search for the mother, uncovering fraud, kidnapping, corruption, and madness along the way. Foggy's friend John Horse, the leader of the local Seminole community, comments: "You realize that sometimes your diction is ridiculous"—to which Foggy replies: "It's ." This exchange pretty much sums up this socially conscious novel's style: colorful fun, with a splash of irreverent wit.