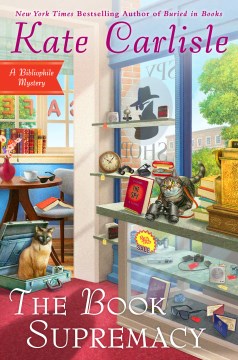 Book-restoration expert Brooklyn and former spy Derek, honeymooning in Paris, are browsing the book stalls on the Seine when Brooklyn buys Derek a first edition of Ian Fleming's The Spy Who Loved Me. Later, they run into Derek's former colleague Ned at the market and show him their find. When the couple return to San Francisco, Brooklyn learns that the book is even more valuable than she thought and agrees to let it be displayed in a special exhibit at a spy museum run by Ned's friend Owen. After Derek receives a letter about Ned's death in Paris, along with a cryptic note that there might be a clue in the book, the couple attempt to retrieve the novel, only to discover that, in the course of an attempted theft at the museum, there has been another murder. Details about book restoration and spy gadgets add a layer of intrigue to this fascinating bibliomystery. Copyright 2019 Booklist Reviews.

While on their honeymoon in Paris, book-restoration expert Brooklyn Wainwright Stone buys her husband, Derek, a gift that seems appropriate, a first edition of Ian Fleming's James Bond novel, . They run into Ned Davies, an old friend of Derek's from his days with MI6, and she shows him the gift. The newlyweds come home to San Francisco, and then learn that Ned has died. Brooklyn wonders if the stranger she saw observing them in Paris has anything to do with it. She lets it slide as she works with the owner of a spy shop to put her new Bond treasure on display. Then someone is killed in the spy shop and surveillance video reveals an intruder trying to steal the book. Multiple deaths and stories of spies and blackmail all seem to circle back to the novel. Unconventional and intricately plotted, this mystery builds in intensity, while the suspense is relieved by moments involving books, friends, and food. Fans of the "Bibliophile" series will enjoy catching up with the courageous couple in this 13th installment (after ). Readers of Carolyn Hart's "Death on Demand" series will also appreciate.

At the start of Carlisle's enjoyable 13th Bibliophile mystery (after 2018's ), bookbinder Brooklyn Wainwright Stone and her husband, Derek Stone, a former MI6 agent, are honeymooning in Paris. On their last day, they tour the bookstalls along the Seine, where Brooklyn decides to buy a copy of Ian Flemings's as a gift for Derek, who, like James Bond, "is dashing, sexy, brave, and daring." Back home in San Francisco, Derek reconnects with Owen Gibbons, a friend who used to work for a U.S. intelligence agency and now owns a spy shop called SPECTRE. Owen persuades Derek to loan him the Bond novel, which turns out to be a valuable first edition, for a special display commemorating the shop's first anniversary. The trouble begins when someone breaks into the shop and tries to steal the book. A related murder is somehow connected to Derek's past. Book lovers and Bond fans won't want to miss this cozy. Agent: Christina Hogrebe, Jane Rotrosen Agency. (June)

To helvetica and backShelton, Paige