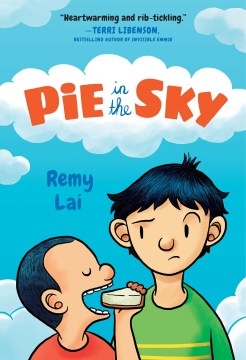 A boy struggles to come to terms with his father's death and his new life after immigrating to Australia in this character-driven novel. Back home, Jingwen's family ran a cake shop. In Australia, Jingwen struggles to understand his classmates and teachers. Worse, his annoying little brother, Yanghao, seems to be learning English and making friends with no trouble at all. Jingwen's refuge becomes secretly baking, with help from Yanghao, all the cakes his father planned to sell in his new bakery. Jingwen thinks if he can bake all of them, maybe he will be forgiven for not always appreciating his father. Maybe everything will be OK again. Jingwen's slow journey through grief and displacement is heartbreaking but ultimately hopeful. Lai's cartoon illustrations depict Jingwen's sense of alienation (at times, Jingwen is drawn as an alien, a ghost, and a robot) with care and sensitivity. Comics interludes, complete with speech balloons, enliven the story. Even though Jingwen deals with heavy burdens, his story also contains plenty of humor. An emotional tale about loss and letting go, pleasantly buoyed by comedy and cake baking. Grades 3-6. Copyright 2019 Booklist Reviews.

Jingwen's family lands in Australia, where he doesn't know the language and isn't interested in making friends. All Jingwen wants to do is bake the elaborate cakes he and his two-years-deceased father perfected in preparation for opening a cake shop. Lai's debut novel—with frequent, blue-tinged illustrations--delves into grief, onerous fraternal responsibilities, and adjusting to life in an "alien" world. Heartbreakingly honest; in equal parts funny and poignant. Copyright 2019 Horn Book Guide Reviews.

It's been almost two years since Jingwen lost his father in a tragic accident; he now finds himself starting over in a new country. The novel begins with Jingwen, his mother, and his (annoying) younger brother Yanghao landing in Australia, where Jingwen does not know the language and isn't interested in learning English or making friends at his new school. All Jingwen wants to do is bake the elaborate cakes he and his father perfected (in preparation for the cake shop his father was going to open in Australia called "Pie in the Sky") without his strict mother finding out that he is breaking her no-baking rule. Lai's debut illustrated middle-grade novel delves into Jingwen's grief and onerous fraternal responsibilities while providing a window into the strain of adjusting to life in an "alien" world. Jingwen's journey through loss will resonate with readers, while his quest to bake all the "Pie in the Sky" cakes deepens this story from typical middle-grade tearjerker to delectable page-turner. Lai's frequent, blue-tinged illustrations provide comic relief (the interactions between Jingwen and Yanghao are often hilarious) and serve to propel the narrative forward; they often include diagrams of the impressive confections Jingwen bakes. Heartbreakingly honest; in equal parts funny and poignant. eric carpenter July/Aug p.131 Copyright 2019 Horn Book Magazine Reviews.

Lai centers her incisive illustrated novel debut on Jingwen, who moves from his unspecified home country to Australia with his mother and younger brother Yanghao after his father's death. The boy mourns the loss of his father and feels like an alien among his fifth-grade classmates as he struggles to learn English, which sounds like "Martian words" (blue-tinged illustrations show others, then the boys, as space aliens in their daily life). Summoning memories of baking with Papa, Jingwen imagines the cakes they'd anticipated selling at Pie in the Sky, the bakery they planned to open upon moving. Jingwen vows to make the 12 cakes, believing this will preserve his memories of Papa—and that "cakes make everything better." But his baking obsession leads to the betrayal of his hardworking mother's trust, landing him and Yanghao in hot water. Though repetition of facts and dialogue (including the brothers' penchant for calling each another "Booger") at times thwarts the narrative flow, its pace accelerates in the final chapters as Lai adds a few surprise ingredients to concoct a deeply satisfying ending for this heartwarming immigrant story about sibling bonds, honesty, and surmounting obstacles. Ages 8–12. (May)

Summer of a thousand piesDilloway, Margaret

Save me a seatWeeks, Sarah