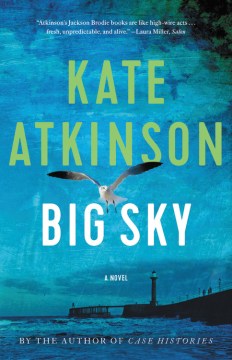 *Starred Review* It's been eight years since Atkinson's last Jackson Brodie mystery (Started Early, Took My Dog, 2011), and, while the three historical novels she has written since then—all with some connection to WWII—have been uniformly brilliant, fans of the ever-brooding, painfully tenderhearted private investigator will be thrilled that Brodie is finally back. He's living in a remote cottage near the sea in Yorkshire, but somehow he still finds no shortage of troubled souls washing up around him needing help. It begins with a runaway bride and a sad sack with suicide on his mind, and, from there, Jackson's menagerie of broken-winged creatures leads him into something much darker, something that will thoroughly reinforce his ingrained pessimism. (Have you ever tried being an optimist? Jackson's former partner, actress Julia, asks him. Once, Jackson replies. It didn't suit me.) Using her signature narrative style, Atkinson not only tells the story from multiple points of view, but also moves back and forth in time, letting us see new sides of an incident from several characters' perspectives. This technique feeds a rich kind of dramatic irony, as we know marginally more than the people in any one scene do, but never quite enough. As the lives of several Yorkshire couples slowly swirl out of control, with the ripples of dysfunction, buried abuse, and tightly held secrets gradually drawing Jackson into their red tide, we marvel at Atkinson's rare ability to create in a relatively few but stunningly deft brushstrokes at least a half-dozen characters with the depth and complexity to own their own novel. Another dazzler from a writer whose talents know no bounds.HIGH-DEMAND BACKSTORY: Atkinson's blend of literary fiction and crime novel attracts readers in great numbers from both those constituencies. Copyright 2019 Booklist Reviews.

After nine years, Atkinson is giving Jackson Brodie of more to do. No details yet on Brodie's new case, but the setting is still Yorkshire, and rumor has it that we'll get more information on Brodie's tangled personal life.

Atkinson's slow-moving fifth Jackson Brodie novel (after 2010's ) finds the former policeman turned PI, who's now based on the east coast of Yorkshire, grappling with parenting. Brodie, who endured a traumatic childhood—a mother lost to cancer, a sister murdered, and a brother who committed suicide—shares custody of 13-year-old Nathan Land, who has an "ego big enough to swallow planets whole," with Nathan's mother, Julia. Though Brodie has some routine work surveilling a suspected cheating spouse, the action only hits high gear relatively late when he happens upon a man about to jump off a cliff, Vince Ives, whose wife, Wendy, was recently fatally bludgeoned with a golf club. Brodie manages to save Vince's life, and his look into Wendy's death involves him in an ugly case of human trafficking. Atkinson has been better at balancing personal and professional story lines, and the presence of a figure from Jackson's past, now a cop involved in an inquiry looking at establishment figures, won't resonate for first-timers. Series fans will best appreciate this outing. Agent: Kim Witherspoon, Inkwell Management. (June)