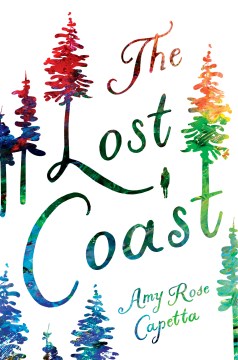 *Starred Review* In Capetta's dreamy, enigmatic tale, a restless teen finds friendship, love, and self-acceptance among a coven of queer witches. Danny arrives in Tempest, California, hoping to escape the wandering energy that compels her out of bed at night, to ditch school during the day, to kiss girl after girl, searching for an elusive peace. She finds the Grays waiting for her, four teenage witches who summoned her to Tempest with a spell to help find their friend Imogen, who disappeared into the redwood forest and returned changed. Imogen isn't the only victim of whatever new, vengeful force has taken root, either; two others are dead. As Danny embraces her dowsing magic, she finds more secrets than the Grays anticipated. Capetta captures the eerie, secretive nature of a town living in the shadow of an ancient redwood forest with poetic language, a nonlinear time line, and shifting perspectives. Readers may occasionally struggle to follow the plot, but the unapologetic characters, diverse in sexual and gender identities as well as physically and ethnically, are the real draw. This is a slow-burning, mystical, and romantic character study about the life-affirming magic of finding a place to belong after being lost for so long. Grades 9-12. Copyright 2019 Booklist Reviews.

High schooler Danny and her mom arrive in Tempest, California, under mysterious circumstances. There, Danny meets a group of queer girls called the Grays, who weave magic in "a braid of traditions." The Grays need help: their most powerful member has become distant and her magic unresponsive. Capetta organically alternates narrative perspectives and time periods in this atmospheric story that thought-provokingly explores the magic within young women and in women loving women. Copyright 2019 Horn Book Guide Reviews.

Higher schooler Danny and her mom arrive in Tempest, California, under mysterious circumstances (Danny: "I was the one who had begged for a new life, my tears salted with guilt"). There, where the redwoods dominate, she meets a group of queer girls called the Grays, who weave magic in "a braid of traditions" that they make up as they go. The Grays need someone to help recover their most powerful member, Imogen, who is acting eerily strange and distant and whose magic has become unresponsive. The characters reflect a range of races and LGBTQ+ identities. The text, too, encompasses many things at once—mystery, fantasy, thriller, and romance—in a realistic, contemporary, insular high school setting. Capetta alternates narrative perspectives and time periods ("Danny Now"; "Danny Weeks Ago"; "The Students of Tempest High School Now") in a way that feels organic if occasionally somewhat disjointed. This atmospheric story thought-provokingly explores the powers of magic within young women and in women loving women. jeannie coutant July/Aug p.124 Copyright 2019 Horn Book Magazine Reviews.

In this haunting contemporary fantasy set in a small town nestled among California's redwoods, a young woman comes into her own power as a witch. After Danny relocates from Michigan, she finds that she may have responded to a summoning spell cast by a local coven, the Grays, which needs her help. Danny, who "kiss a lot of people. Mostly girls," finds unexpected kinship with the ethnically diverse and proudly queer group, which includes "bisexual black witch" Hawthorn; nonbinary, asexual Lelia; and "Fat. Queer. White" synesthete Rush. With their aid, Danny unlocks her ability as a dowser, able to find that which is lost or missing. But as the group seeks to restore their former leader's powers, they discover something dangerous in the mists and trees that has already claimed several victims. With lush prose, atmospheric descriptions, and nonlinear storytelling (segments intertwine present and past), Capetta () crafts an accomplished tale with a wide range of representation. Frank discussions of sexuality and identity intertwine with an almost raw emotionality as the characters wholeheartedly embrace their true selves, and an underlying current of suspense supports the overarching mixture of intrigue and interpersonal development. Ages 14–up. (May)