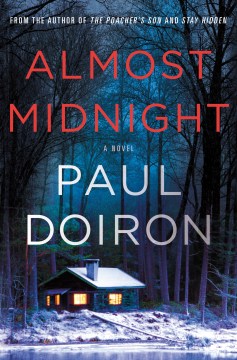 Billy Cronk's going a little stir-crazy in prison, so when he tells Maine game warden Mike Bowditch that it's urgent Mike dig into the past of a new female prison guard, Mike takes it with a grain of salt. But, since it was Mike's testimony that landed his friend in prison for manslaughter, he decides to give it a try. Then Billy saves the guard from being knifed to death in a prison attack, and Mike knows his friend is onto something. Meanwhile, the wolf dog that Mike rescued from drug dealers years ago has been shot with a distinctive arrow, and Mike wants justice for the noble creature. Mike's vast network of Maine law-enforcement colleagues, including his new girlfriend, state trooper Dani Tate, help him on both fronts. Fans of outdoors procedurals, like those by William Kent Krueger or C. J. Box, will be delighted to make get to know the consistently strong Mike Bowditch series, now in its tenth installment. Copyright 2019 Booklist Reviews.

It's April in Maine, and warden inspector Mike Bowditch has cut his fishing vacation short to visit his incarcerated friend Billy Cronk. Soon Mike learns that Billy is in the hospital after being wounded in a fight that killed a guard. When Mike goes to the hospital to see Billy, there's more violence, and an inmate dies. Next, Mike hears that Shadow, the wolf-dog he rescued, has been found grievously wounded up in the mountains. He heads north and meets a hostile reception. Mike's investigative mettle is tested as he tries to solve the two mysteries and save both human and animal. In this tenth book featuring Bowditch (after ), Doiron takes disparate elements of his protagonist's past and weaves them in a tight line, ramping up the tension slowly until the story reaches can't-put-it-down velocity. Readers unfamiliar with Mike's life and career won't get lost, as Doiron does plenty of telling to set up the plot. Though newcomers will be better served by starting at the beginning of the series, fans will be satisfied hearing of Mike's latest exploits.

At the start of Edgar-finalist Doiron's solid 10th mystery featuring game warden Mike Bowditch (after 2018's ), Mike visits the Maine State Prison at the behest of his best friend, Billy Cronk, who's incarcerated there for killing a man who ambushed him and Mike four years earlier. Billy is prone to paranoia, so when he asks Mike to secretly (and illegally) investigate corrections officer Dawn Richie without providing a reason, Mike refuses. Soon afterward, Billy is hospitalized after an attack on Richie that he helped thwart. Mike fears Billy is caught up in something criminal and intends to dig further, but then he learns that someone has shot Shadow, a wolf-dog that Mike rescued before it escaped and paired off with Maine's last wild wolf. Despite a tendency to reduce secondary characters to stereotypes, Doiron writes with eloquence, authority, and passion about Maine's wilderness and its creatures. The twin story lines intrigue, and though the delay in integrating them gives the plot a disjointed feel, the conclusion is an emotionally satisfying, adrenaline-fueled sprint. Fans of C.J. Box will find much to admire. Author tour. Agent: Ann Rittenberg, Ann Rittenberg Literary. (July)