The stories you tell / Kristen Lepionka. 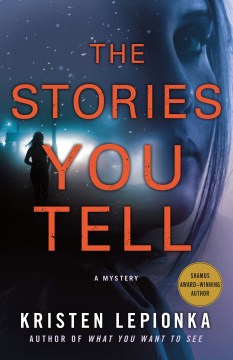 PI Roxane Weary's brother, Andrew, asks for her help after a woman he hardly knows, Addison, comes to his home in the middle of the night, obviously upset, then runs out after using his phone. Andrew is concerned about Addison and wants Roxane to find her. Since she has only one active case—identifying who is sending out defective leggings under the brand of a high-end manufacturer—Roxane begins a frustrating search for the woman, who had been working as a DJ at a seedy nightclub. Complicating matters, the nightclub closes after another of its employees goes missing; then the body of a police detective who was also looking for Addison is found in the river. An online dating site seems to be at the heart of things, but Roxane can't seem to put it all together. There are problems on the personal front, too, as Roxane's relationship with her lover, Catherine, turns sour. If the cases in this third mystery are less compelling than those earlier in the series, Roxane herself, a remarkably well-drawn and interestingly flawed character, continues to command interest. Copyright 2019 Booklist Reviews.

Roxane Weary is concerned when brother Andrew telephones, distraught that DJ friend Addison came by in near hysterics, then left without explanation. Then Addison's father tells the police she phoned him, incoherent but for the mention of Andrew, who's soon suspected of foul play. Third in the Shamus Award-winning series.

Private investigator Roxane Weary heads to her brother Andrew's place when he calls her in the middle of the night with a strange story about a girl he used to work with, Addison Stowe, who showed up at his place in a panic, begging to use the phone, and then ran out. Roxane and Andrew trace her to the shabby nightclub Nightshade, where she worked as a DJ, but the club is inexplicably closed. Although Roxane keeps the police in the loop, her brother is arrested, a cop is discovered dead in the river, and a possible witness is cornered and shot by the SWAT team. Addison is the only link to the three men. As Roxane digs for more on the missing young woman, she finds there are other men connected to Addison through a dating app called BusPass. Building to a chilling and surprising conclusion, the third book in Lepionka's Shamus Award-winning series () is both intricately plotted and character-driven, with a complicated protagonist. Suggest for fans of detective novels with unconventional sleuths. [See Prepub Alert, 1/7/19.]

At the start of Lepionka's entertaining third mystery featuring Columbus, Ohio, PI Roxane Weary (after 2018's ), Roxane gets a late-night call from her brother, Andrew, asking for help. A short time before, Addison Stowe, a DJ working at Nightshade, a nearby nightclub, appeared at his door in great distress, begging to use his phone. After making the call, Addison rushed out, despite Andrew's efforts to detain her. When Roxane tries to find Addison, she discovers that she hasn't returned home, Nightshade is completely deserted, and that a few days earlier a policeman visited Addison's apartment asking for her. Roxane's search for Addison becomes personal after the police learn that Andrew was the last person to see her before she went missing; they arrest Andrew for drug possession, a pretext to detain him while they investigate Addison's disappearance. A cop's murder and troubles in Roxane's long-term relationship heighten the drama. Fans of plucky female detectives will look forward to Roxane's further adventures.

Bury me when I'm deadHead, Cheryl A.