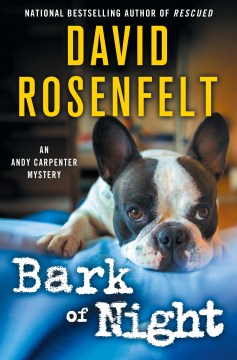 Growing weary of the detective hero with a wrecked marriage, a botched career, and a drinking problem? Try Rosenfelt's series hero, Andy Carpenter, who is probably as close to Lord Peter Wimsey as the modern American crime genre can get. He's rich, he pretends to be dimmer than he is, he refuses to take anything seriously. Until the first corpse appears. This time it's a potential corpse, and it's a dog, a likable little French bulldog called Truman who got dumped at the vet with a note saying his owner wants the dog euthanized. Who would do such a ghastly thing? A clear, straightforward procedural begins, as Andy sets out to find the owner, who turns out to have been murdered. Despite his wealth and love of animals, Andy prides himself on being an ordinary guy—the Wimsey comparison goes only so far. The narrative weakens a bit as the ending nears, but Rosenfelt's humor clicks. After buying a ticket to the pricey Hamilton, Andy broods, I could have bought something with bucket seats. Copyright 2019 Booklist Reviews.

When his veterinarian is instructed to euthanize healthy French bulldog Truman, understandably angry defense lawyer Andy Carpenter agrees to his dog-rescue organization, the Tara Foundation, as an alternative. Then Truman's microchip reveals that the man who dropped him off was not his owner, who is later found to have been murdered. From the Shamus Award-winning author.

In this 19th "Andy Carpenter" mystery (following ), the New Jersey lawyer is called into his vet's office for some legal advice. Someone has brought in a French bulldog to be put down. However, the dog turns out to be healthy, and his microchip reveals that his name is Truman and his owner has been murdered. A young man has already been arrested for the crime, and Andy certainly doesn't want to get involved. Pressure from his wife and concern for Truman soon propel him into the young man's defense. A mob hit man's body found in a local river and several suspicious deaths of homeless men complicate the case, which broadens to include Philadelphia, Boston, and Florida's Gulf Coast. Andy and his legal team must figure out whodunit and why before the trial is over. Fans of the series will enjoy this latest installment, and newcomers won't be put off since not too much prior information is required to jump in. One shortcoming of the book is that Truman, the catalyst for the whole plot, is whisked offstage to the Tara Foundation, Carpenters' dog-rescue center, until his happy ending. [See Prepub Alert, 1/7/19.]

In Edgar finalist Rosenfelt's enjoyable 19th mystery featuring Paterson, N.J., defense attorney Andy Carpenter (after 2018's ), Andy is incensed when his vet informs him that someone left a French bulldog called Buster at the vet's with instructions to put the dog down. But the dog's microchip says his name is Truman, and he belongs to James Haley, a documentary filmmaker who was recently murdered. The police arrest 20-year-old Joey Gamble for the crime, whom Haley interviewed in his apartment earlier in the evening of the murder. Since the man who brought Truman in to be euthanized was a known gang enforcer, Andy thinks that Joey has been set up, and so he mobilizes his formidable investigative team to help him find Haley's real killer. Rosenfelt does a great job of unfolding an intricate plot as Andy slowly builds a case to exonerate Joey. Andy is a smart, witty, relatable lead with a lot of heart, and he and his cohorts are a pleasure to spend time with. This is a treat for mystery readers and dog lovers. Author tour. Agent: Robin Rue, Writers House. (July)

Of mutts and menQuinn, Spencer

The finders: a Mace Reid K-9 mysteryBurton, Jeffrey B.