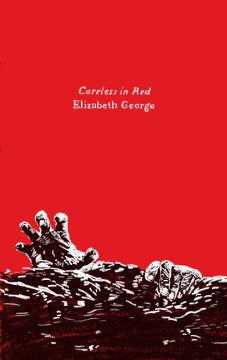 You can't keep a good detective down. George has put longtime series hero Detective Superintendent Thomas Lynley of New Scotland Yard through quite a bit lately: in her last novel, With No One as Witness (2005), Lynley's much-loved wife was shot to death on the street, reducing him to a grief-stricken shell and leading to his resignation from the Yard. How to resurrect him? George uses a pretty klunky (but familiar to all mystery fans) deus ex machina device. Lynley has embarked on a walk along the coastal path in Cornwall; his rationale is that if he doesn't keep moving, despair will overtake him. Sure enough, on day 43 of his walk, he spots, far below, what seems to his trained eye to be the vivid red and crumpled shape of a man who has plunged to his death. The machine creaks into place, with Lynley (whose walk has made him appear like a homeless man) being treated as a suspect, then with grudging respect from the local, bumbling constabulary, and finally as someone his old associate Barbara Havers of New Scotland Yard seeks to restore to his post. Despite the obvious restoration device, George delivers, once again, a mystery imbued with psychological suspense and in-depth characterization. Copyright 2008 Booklist Reviews.

This is the book Inspector Lynley fans have been waiting for ever since George dropped the bombshell of Helen Lynley's murder at the end of With No One as Witness . Thomas Lynley, grief-stricken in the wake of the death of his wife and unborn child, sets off walking around the southwest coast of England. On the 43rd day of his walk, Lynley comes upon the body of a young climber who has fallen to his death. When police discover that the equipment of the fallen climber has been tampered with, Lynley gets caught up in a murder investigation. New Scotland Yard sends Lynley's old friend and foil Barbara Havers to help with the case (and to keep an eye on Lynley). The victim—16-year-old lothario Santo Kerne—had many enemies in the small Cornish town of Casveyln, so the investigation of his murder is satisfyingly intricate. In keeping with George's standards, both the inspectors and their many suspects are complex, fascinating folks, and, also as usual, they all have dramatic, if a bit unbelievably dire, back stories. Highly recommended for all mystery collections. [See Prepub Alert, LJ 1/08.]—Jane la Plante, Minot State Univ. Lib., ND

At the start of bestseller George's stellar new suspense novel, the grieving Thomas Lynley, a Scotland Yard detective who left the force after the murder of his pregnant wife, Helen, in With No One as Witness (2005), is filling his days with a long trek in his native Cornwall. During his ramble, Lynley stumbles on the body of teenager Santo Kerne, who apparently fell from a cliff onto some rocks, though it soon becomes evident that someone tampered with Kerne's climbing gear. As the first on the scene, Lynley himself comes under suspicion, despite his lack of history with the victim, by the investigating officer, the capable but crusty Det. Insp. Bea Hannaford. Lynley fittingly plays a secondary role in the homicide inquiry as he continues to struggle to find a reason for living after his devastating loss. The plausible resolution of the crime leaves enough ambiguity to satisfy readers who prefer psychologically sophisticated plots and motivations. 10-city author tour. (May)

The man with a load of mischiefGrimes, Martha