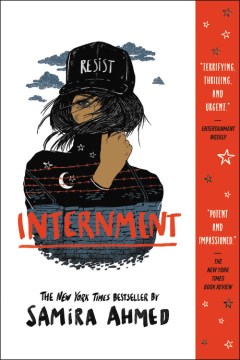 *Starred Review* Set shortly after the 2016 presidential election, Ahmed's novel presents a chilling depiction of America, in which U.S. citizens allow themselves to be controlled by prejudice and fear and succumb to the hateful rhetoric of a populist leader. Seventeen-year-old Layla Amin and her parents are among the Muslims rounded up and transported to Manzanar, an internment camp for Muslim American citizens. While most people quietly comply, Layla is determined to fight back for the freedom that is rightfully hers. Layla finds allies both inside and outside the camp, and before long, she herself is at the center of a rebellion against the despicable people in charge. This is a poignant, necessary story that paints a very real, very frank picture of hatred and ignorance, while also giving readers and marginalized individuals hope. It emphasizes that the oppressed have a voice and the power to speak up and fight back, while also reminding us that all citizens have the obligation, responsibility, and power to raise their voices and defend their fellow citizens from mistreatment or abuse. Though it might recall dystopian novels of the recent past, this carries so much more weight and is infinitely more terrifying, since its setting—a near-future U.S.—could very well exist today, tomorrow, or only a handful of years from now. This timely, important novel should spark many conversations about contemporary issues. Grades 9-12. Copyright 2019 Booklist Reviews.

In a near-future dystopian world, seventeen-year-old Layla Amin, a Muslim, is ripped from her home and sent to a desert camp by a racist, Islamophobic regime. Layla and others resist, but freedom may come at the cost of lives. The line between speculative fiction and contemporary realism has never been fuzzier than in this emotionally authentic, devastatingly intimate, startlingly concrete portrait of democratic impotence and governmental oppression. Copyright 2019 Horn Book Guide Reviews.

Xenophobic fear-mongering, book burnings, terrified families rounded up in the middle of the night to be thrown into internment camps—all painfully familiar elements of America's past and present—descend upon Layla Amin's near-future dystopian world like a drizzle that steadily becomes a torrent. Seventeen-year-old Layla watches as a racist and Islamophobic president emboldens a hateful regime that considers all Muslims to be threats. Ripped from her home and sent to a desert camp, Layla resists the appalling injustice, refusing to accept terror and imprisonment as "normal." And she is not alone: other teens and even a few guards join Layla in plans to expose the camp and attain their freedom. But with fellow Muslims being beaten or disappearing to black-ops sites and a sadistic camp director prepared to destroy the resistance by any means, freedom may come at the cost of lives. The line between speculative fiction and contemporary realism has never been fuzzier, and Ahmed doesn't so much balance on it as erase it, in an emotionally authentic, devastatingly intimate, and startlingly concrete portrait of democratic impotence, governmental oppression, and the mechanics that keep them in place. anastasia m. Collins March/April 2019 p 74 Copyright 2019 Horn Book Magazine Reviews.

Ahmed () sets her chilling novel in the very near future: two-and-a-half years after an election that brought about a Muslim ban, Exclusion laws, and the internment of Muslims in a disturbing echo of the Japanese internments of the 1940s. Layla Amin, the rebellious 17-year-old Muslim narrator, is enraged by the changes that her small liberal California community accepts: curfews, book burnings, required viewing of the U.S. president's weekly National Security Address. On a personal level, she was suspended from school for kissing her non-Muslim boyfriend in public, and her poet-professor father has lost his job. Still, her family's abrupt nighttime "relocation" to a camp—during which each arrival is branded with ultraviolet identification encoding—is a shock. While her parents shrink into compliance, Layla quickly makes friends and allies who band together to bring public attention to internees' treatment, close down the camps, and put an end to the country's fascism and Islamophobia. Ahmed keeps the tension mounting as Layla faces increasingly violent consequences for her actions; the teenagers' relationships are depicted authentically, and their strength and resistance are inspiring. An unsettling and important book for our times. Ages 12–up.