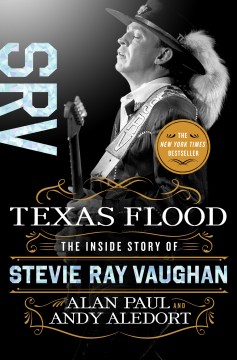 Many music journalists consider Stevie Ray Vaughan the last of the "true blues" guitarists. Since he died in a helicopter crash on August 27, 1990, his music has never been out of the limelight. In fact, the legend of Stevie Ray has grown. Adopting an oral history format, Paul and Aledort have compiled a biography that features a large cast of fellow musicians and admirers such as Vaughan's older brother and guitarist Jimmie as well as Alligator Records founder and president Bruce Iglauer, Eric Clapton, Buddy Guy, Steve Miller, Bonnie Raitt, and many more. The book also includes interviews with Vaughan himself. "I got my first guitar when I was seven," he once said. As soon as he heard the blues, he was smitten. To Vaughan, playing the guitar was a religious experience. Texas Flood also covers the Austin music scene, Vaughan's slow progression as a front man, his drug and alcohol addictions, and his band Double Trouble. When he died, his life was coming together on both professional and personal levels. A must for Vaughan and blues fans. Copyright 2019 Booklist Reviews.

An incendiary performance, a late-night air crash, an artist silenced, and an enduring legacy. The stuff of rock star myth and legend, but then Stevie Ray Vaughan (1954–90) was a legendary guitarist, writer, and performer, and as Paul () and journalist and performer Aledort ably describe, many so-called rock star myths were the stuff of everyday life to Vaughan. This riveting biography draws on firsthand accounts from Vaughan's band Double Trouble, knowledgeable insiders, and close friends and family. The anecdotes are nonstop, and the conversational narrative has the feel of one long Vaughan solo. Dig out those recordings. You'll want to hear them all again as you read the stories behind the songs and performances. The epilog was written by Vaughan's older brother Jimmie (an incredible guitarist himself), and the appendix details the gear Vaughan used. Vaughan deserved this book, and, as it should, the content will stay with readers long after the last note has sounded. It's been 29 years since Vaughan's passing; this is the book fans have been waiting for.

In this definitive oral history, Paul () and musician and teacher Aledort trace the life and music of guitarist Stevie Ray Vaughan (1954–1990). Drawing on hundreds of interviews with Vaughan's friends, family, and fellow musicians, the authors detail the guitarist's rise from a working-class background in Dallas; his formative experiences in countless bands in Dallas and Austin; his national breakthrough success in 1983 with his first LP and subsequent years of touring, which led to an increase in his drug and alcohol abuse; and his final years of sobriety before his death in a helicopter crash in 1990. The authors excellently capture how Vaughan, in the words of bassist Tommy Shannon, "always played as if there was no tomorrow." The interviews with fellow musicians and engineers provide insightful takes on Vaughan's work, especially , which was recorded live after Jackson Browne loaned the band his studio and before Vaughan even had a record contract. ("There was no finagling on anything," says engineer and producer Richard Mullen. "It was about as live and true to a performance as it could possibly be.") Fans will be thrilled with this intelligent, informative, and enlightening biography of the guitar great.

In the pleasure groove: love, death, and Duran DuranTaylor, John, 1960-