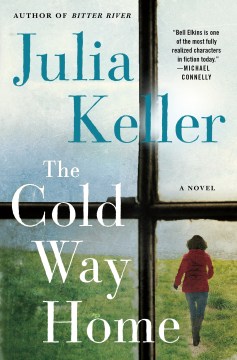 *Starred Review* Near the ruins of Wellwood, a state-run mental hospital now long abandoned, Bell Elkins finds a woman's body. It's not that of the runaway teenager whom her agency, Investigations, has been hired to find but rather that of Darla Gilley, a lifelong resident of Acker's Gap, West Virginia, who died in the same place where her grandmother, Bessie, had died 60 years earlier, both of them murdered. Investigations, made up of three formers—former prosecutor Bell, former sheriff Nick Fogelsong, and former trooper Jake Oakes, injured on duty and confined to a wheelchair—is asked to work on the Gilley case, the first major homicide in the area in more than a year. Wellwood's dreadful history is a major factor in the crime, but it all revolves around family, a theme that's central to the lives of the major characters. Bell, divorced with her only child an adult daughter in Charleston, considers her colleagues family; Nick, in the midst of a divorce, is in awe at finding love again; while Jake and his live-in lover, Molly, surmount an impasse about their future. Keller's Bell Elkins series sets a standard for its evocation of place and for the sensitive portrayals of its characters, with Bell the most masterfully drawn of all. This is introspective, literary crime fiction at its best. Copyright 2019 Booklist Reviews.

Having joined forces to create BJ Investigations, former prosecutor Bell Elkins and former cop Jake Oakes have just run into their first hard-to-fathom case. Amber Slight is found dead in the West Virginia woods, with all the evidence washed away by seven days' worth of hard rain.

Mary Higgins Clark–finalist Keller's gloomy eighth Bell Elkins novel (after 2018's ) finds the Acker's Gap, W.Va., prosecutor turned PI stumbling upon a body stuffed in the ruins of Wellwood, a psychiatric hospital that burned to the ground decades earlier. After learning that the victim, Darla Gilley, died of blunt force trauma to the head, Bell works with her business partners, former sheriff Nick Fogelsong and former deputy Jake Oakes, to unravel the murder. They discover that tragedy has plagued the Gilley family for generations, including the murder of Darla's grandmother who worked—and died—at Wellwood. Bell speculates that the two murders are somehow connected, and her sleuthing opens her eyes to a very dark history of psychiatric care during the mid-20th century. Unfortunately, unrelated albeit poignant subplots, such as Jake starting a family with his girlfriend, slow the action. Still, this is a strong addition to the series that can easily be read as a standalone. Agent: Lisa Gallagher, DeFiore & Co. (Aug.)

The heat of the moonParshall, Sandra

Signs in the bloodLane, Vicki