The girl who lived twice / David Lagercrantz ; translated from the Swedish by George Goulding. 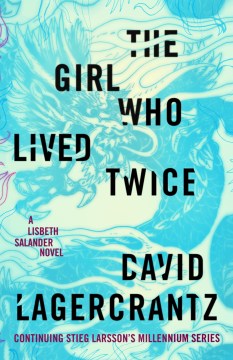 *Starred Review* Lagercrantz repeats the three-peat with his third Millennium novel starring Lisbeth Salander, following the original trio by the late Stieg Larsson. If this turns out to be, as Lagercrantz has suggested, the final installment in the series, it's going out on a resounding tonic chord. As usual, there are two stories in play here, the first involving Stockholm investigative reporter Mikael Blomkvist's attempt to identify a homeless man, and the second, of course, featuring Salander, who is on the trail of her sworn enemy, twin sister Camilla. If this installment has a weakness, it's that Blomkvist's search, which leads to a tragedy that happened years before on Mt. Everest, seems unnecessarily complex. That might be fine in another novel, but here the reader wants more of Salander and less of mountain climbing. Fortunately, Lagercrantz, when he can get himself down the mountain, delivers in high style. The final chapter in Salander's ongoing quest to close the book on her malignant past, we learn, involves settling scores with Camilla, who is equally determined to rid the world of Salander, which Camilla plans to do by exploiting her sister's fondness for Blomkvist. Bad move, Camilla. Alternately playing her laptop's keyboard like a Stradivarius and gunning her motorcycle like Steve McQueen in The Great Escape, Salander is what she's always been: a force to be reckoned with and one of the most memorable series leads in the history of crime fiction. HIGH-DEMAND BACKSTORY: Salander fans, who long ago put aside any misgivings about Lagercrantz taking over the Millennium series, will be eager to follow the Girl with the Dragon Tattoo as she attempts to sweep clean her family closet. Copyright 2019 Booklist Reviews.

In 2013, it was announced that Swedish journalist/novelist Lagercrantz would write a continuation of Stieg Larsson's blockbuster "Millennium Trilogy," and after the success of 2015's , two more novels were contracted. appeared in September 2017, and now we have . With a 300,000-copy first printing.