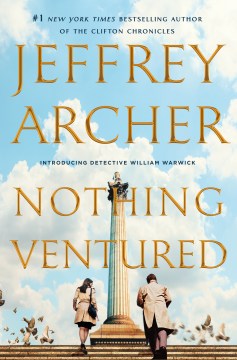 In Archer's multivolume Clifton Chronicles, one of the central characters was a novelist whose popular protagonist was William Warwick, a detective with the London police. Now Archer is launching a new series, starring Warwick. Sure, it's a little meta: a series about a fictional character who was created in another series by another fictional character. But it's also a fine novel. Archer has a real gift for family sagas, and here, with Warwick, he's launching what promises to be a series just as riveting as the Clifton Chronicles. We pick up William's story early in his career, as he rejects his attorney father's entreaties to follow in his footsteps and instead joins the Metropolitan Police Force's arts and antiquities squad, where he attempts to track down a missing Rembrandt (among other interesting cases). Readers who know Warwick from the Chronicles will be interested to learn more about him (such as exactly how he acquired the nemesis who haunts his every move later in his career), but previous knowledge of the character is certainly not necessary to enjoy this first in what we hope will be a long series. Copyright 2019 Booklist Reviews.

From age eight, William Warwick knew he wanted to be a police detective. His father, a criminal barrister, wished William would have followed in his footsteps. But with the assistance of his mother, William went to university, studied art, and became a police officer. He starts at the bottom, walking a beat as a police constable, although he could have been fast-tracked as a college graduate. When he passes the detective's exam, William is assigned to the Metropolitan Police Force, attached to Art and Antiques. While he works several cases, because of his knowledge of art, his major assignment involves the theft of valuable paintings, forgeries, and a finder's fee when the paintings are "recovered" on behalf of the insurance companies. While investigating, he meets Beth Rainsford, a beautiful gallery research assistant, who has family secrets. The case, and Beth's secret, result in riveting simultaneous court trials, in a story that builds in intensity. Following the success of the historical "Clifton Chronicles," Archer launches a series set in the 1980s. As he says, it's the story of a detective, not a detective story. Archer's numerous fans will appreciate another dramatic, character-driven mystery set in the world of art, police work, and court trials. [See Prepub Alert, 3/17/19.]

An opening note to bestseller Archer's enjoyable series launch informs the reader: "This is not a detective story, this is a story about a detective," the detective being William Warwick from the author's Clifton Chronicles (, etc.). In 1979, William, who has always wanted to be a police detective, tells his father he's not going to follow in his father's footsteps and become a barrister. Joining the London police force straight out of school, he quickly proves himself to his superiors and in short order moves from patrol officer to fledgling detective for Scotland Yard's Arts and Antiquities unit, where he investigates forgeries, counterfeit antiquities, a missing Rembrandt, and a master art thief. A fully realized character, the intelligent Warrick is ambitious but naive with a lot to learn. He's surrounded by a distinctive cast of family, colleagues, and villains, while a well-placed romantic situation fills out a near-perfect hand. The final section dealing with dueling courtroom dramas brings genuine suspense to a relatively bloodless, but thoroughly gripping, tale. Archer reinforces his position as a master storyteller.

The woman who lost her soulShacochis, Bob