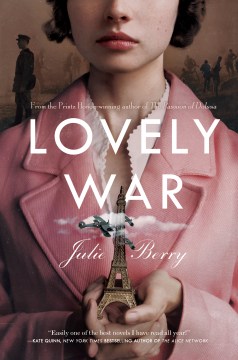 *Starred Review* Love and war. They've been inextricably intertwined in literature since Helen of Troy's face launched a thousand ships. And just as the Greek goddess Aphrodite had a hand in that mash-up of desire and havoc, so is she also on the front lines in Julie Berry's sweeping historical novel, which begins in 1942. A stylish couple can barely keep their hands off each other as they take an elevator up to their hotel room—where the woman's husband awaits. But this is no ordinary trio. They are revealed to be Aphrodite, Ares, and Aphrodite's long-suffering (very long-suffering) husband, Hephaestus, god of forges and fire, who entraps the adulterers in a gold mesh net. Aphrodite tells Hephaestus he knows nothing of love, but she can show him what it looks like. Taking a page from yet another literary figure, Scheherazade, Aphrodite takes the whole night to spin a story that wraps her relationship with Ares, the god of war, around the story of four lovers who meet during WWI: James Alderidge, on his way to the front; Hazel Windicott, a pianist, who has a few days to fall in love with him; Colette Fournier, a young Belgian woman whose family has all been killed by the Germans; and Aubrey Edwards, a Black soldier, in France to both play jazz with an infantry band and fight for America. In hands less skilled than Berry's, this multifaceted novel might easily have spun out of control. Mixing Greek gods (Hades and Apollo also join their fellow Olympians as the story unspools), the brutally described horrors of war, the tenderness of love, and the evils of racism, in both its blatant and insidious forms, seems more than one book can handle. Yet Berry is her own Scheherazade, mesmerizing us with intertwined tales that describe the depths of suffering and the sweetness of love with remarkable intensity and naturalness. This is one of those books in which readers will feel that they are in it together with all the story's characters. In fact, it is one of Berry's real triumphs that she manages to give nearly equal weight to a large cast of very different characters. James' evolution from a lighthearted young man to a cruelly hardened soldier would seem to have much more depth to it than the story of Hazel, a shy musician. Similarly, Aubrey, spared death when white soldiers mistake his friend for being the Black soldier stepping out with Colette, and who endures both the hell of war and the injustice of having his accomplishments denigrated, is the kind of character who could easily dominate. And, yet, Berry's portrait of the friendship forged between Hazel and Colette, as they spend the war in France as volunteers, waiting to learn the fates of their loves, though a quieter part of the tale, emerges every bit as forcefully and meaningfully as the more dramatic stories.This is not particularly a young adult book. Every emotion, description, and literary sleight-of-hand could just as easily be in an adult novel. And that is one of Berry's greatest strengths. She just writes. All of her young adult novels have been different from one another, from fantasy to religious drama. This one is heavily researched, as Berry explains in her author's notes, which detail how much of the framework is based on facts, whether it be the stories of Black servicemen in WWI or the particulars of the weapons used in the war or the roles of women on the home front. But all that detail folds effortlessly into the story, so uncommon in frame but heartbreakingly familiar in emotion. Lovely War proves again that Berry is one of our most ambitious writers. Happily for us, that ambition so often results in great success. Grades 9-12. Copyright 2019 Booklist Reviews.

When the Greek god of fire, Hephaestus, catches his wife Aphrodite, goddess of love, in 1942 Manhattan in a passionate affair with his brother Ares, god of war, Aphrodite defends her actions by showing the two gods what real love looks like. With pathos and wit, Aphrodite relates two intertwined love stories involving four mortals swept up in World War I. Eighteen-year-old Hazel Windicott meets nineteen-year-old James Alderidge when she's playing piano at a parish dance in her London neighborhood a week before he's set to report for military service in France. And it's Hazel who introduces the other couple to each other: YMCA relief worker Colette Fournier, a Belgian orphan whose family was killed by the Germans, and ragtime/jazz musician Aubrey Edwards, an African American doughboy from Harlem. The four humans suffer great losses throughout the course of this saga, driving home Aphrodite's eloquent point that everyone, human and god alike, is entitled to love and be loved, no matter his or her imperfections. Berry showcases her masterful storytelling ability, weaving together a tale—in tight, short chapters that keep the pace moving—that spans years, continents, and multiple perspectives, with poetic descriptions painting a vivid picture for readers (candlelight bends back and forth "gracefully, like a flock of starlings in flight"). She doesn't shrink from addressing heavy-hitting and still-pertinent topics: racism, the horrors of war, women's subjugated role in society. This poignant novel will make readers, by turns, laugh, cry, and swoon, but what Aphrodite offers most is hope: "Let them start their dreadful wars, let destruction rain down, and let plague sweep through, but I will still be here, doing my work, holding humankind together with love like this." Back matter includes a bibliography and extensive historical notes on WWI. cynthia k. ritter March/April 2019 p 75 Copyright 2019 Horn Book Magazine Reviews.

Berry () brings to life wartime horrors and passions with commentary from Olympian gods in this love story filled with vivid historical detail. To show her husband, Hephaestus, the real meaning of love and its connection to war and art, Aphrodite (with the help of Apollo, Hades, and Ares) tells the emotion-packed WWI saga of two besotted couples drawn together by music and war: British pianist Hazel and soldier James; African-American jazz musician Aubrey and Colette, a Belgian war orphan with a remarkable singing voice. After James reports to duty, Hazel follows, taking a wartime volunteer position in France. There, she meets Colette, who is still reeling from her wartime losses, and introduces her to Aubrey, who quickly steals Colette's heart. James and Aubrey witness horrors on and off the battlefield, and Hazel and Colette cling to each other during the best of times, such as when Hazel has the opportunity for a brief reunion with James, and the worst, as when Aubrey goes missing. Berry's evocative novel starts slow but gains steam as the stories flesh out. Along the way, it suggests that while war and its devastation cycles through history, the forces of art and love remain steady, eternal, and life-sustaining. Ages 12–up. (Mar.)

The fountains of silenceSepetys, Ruta

The game of Love and DeathBrockenbrough, Martha

The blossom and the fireflySmith, Sherri L.

Salt to the seaSepetys, Ruta