This time will be different / Misa Sugiura. 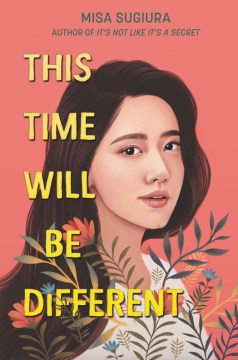 Will CJ Katsuyama ever not be a disappointment to her driven, business exec mom? The sense of inadequacy weighs her down sometimes. And there's her best friend Emily, who seems to be falling for an alpha girl at school—why can't CJ just be happy for Em instead of bummed, unable to settle into her own relationship with the right guy? Readers will know that life is never that easy. CJ's emotional landscape is a nonstop roller coaster. Her inner thoughts crackle with an angst and self-doubt that teens will find engaging. A plot thread involving a past abortion further complicates CJ's psyche and clouds her emotional security, but when she gets involved in a campaign to right past wrongs—uncovering the legacy of some Japanese American families, including her own, during the internment period—CJ becomes passionate and driven in her own right. The plot can be crowded, for sure, but Sugiura's deep dive into mother-daughter relationships, the fragility of self-worth, and the gathering of courage resonates deeply. Grades 9-12. Copyright 2019 Booklist Reviews.

Interned during WWII, the Katsuyama family was forced to sell its flower shop and spent years earning enough to buy it back. Contemporary teen CJ Katsuyama, who works in the family shop, fights for the shop after learning it might be sold to a corporation. The story paints an engaging picture of a girl facing the past--both her family's and her own--in service of her future. Ind. Copyright 2019 Horn Book Guide Reviews.

When thousands of Japanese Americans were sent to internment camps during World War II, they had few options for managing the property and businesses they left behind. The Katsuyama family owned a flower shop, Heart's Desire, that they were forced to sell for a fraction of its cost, and subsequently spent years earning the money to buy it back. Contemporary teen CJ Katsuyama, who works in the family shop, has grown up hearing the story of how her grandparents never gave up on their dreams. Unambitious, CJ must nevertheless decide whether to help fight for the shop after learning it might be sold to a huge corporation. This dilemma leads to bigger fights about what to do with problematic names for buildings (her school is named for the wealthy family who profited from the Katsuyamas' internment) and what it means to erase or whitewash the histories of non-white Americans. The narrative incorporates "brief history" timelines of the Katsuyama family and CJ's romantic past, and as CJ begins to lead the fights to both rename her school and save the shop, the story takes on difficult questions—about how to truly center voices of color in organizing efforts and how to support people who are only beginning to learn to fight for justice. The story can occasionally feel a bit overcrowded and clumsy in its integration of all these issues, but when it hews closely to CJ's perspective, it paints an engaging picture of a girl facing the past—both her family's and her own—in service of her future. An author's note and "index of flowers and their meanings" are appended. christina l. dobbs July/Aug p.137 Copyright 2019 Horn Book Magazine Reviews.

In Silicon Valley, Japanese-American CJ Katsuyama, 17, has yet to show an interest in or an aptitude for anything, except perhaps working at the family's failing flower shop, Heart's Desire, with her aunt Hannah, much to her overachieving venture capitalist mother Mimi's chagrin. Mimi gives Hannah an ultimatum about the business—fix it or sell it to McAllister Venture Capital, a family that partially built its wealth by acquiring the property of Japanese-Americans forced into internment camps during WWII. The family flower shop was one of those businesses, sold cheaply and bought back by CJ's grandfather at the market rate decades later. In this tension, CJ finally finds her cause: save the family business, and make the McAllisters pay for their past transgressions. Sugiura () deftly weaves historical fact into this coming-of-age narrative, which also explores a budding romance and CJ's curiosity about her father's identity, a secret her mother has never revealed. Through CJ, she also addresses how the myth of the model minority has impacted Asian-Americans but is careful to not judge success within the Asian-American community. Sugiura provides an entertaining and informative backdrop that allows CJ to explore her own sense of identity while giving readers a front seat to her process. Ages 13–up. Agent: Leigh Feldman, Feldman Literary Agency. (June)