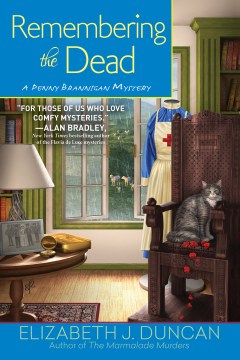 Penny Brannigan, a spa owner in Llanelen, Wales, is tasked by Emyr Gruffydd to plan a black-tie dinner party to commemorate the 100th anniversary of the end of WWI. The party will include an exhibit of WWI artifacts, including the newly restored Black Chair, a historic Welsh treasure awarded posthumously to poet Hedd Wyn, the 1917 winner of Wales' highest literary honor. During the party, the chair disappears, and a waiter is found dead. Penny is asked to investigate the murder by the dead man's family, and Emyr wants her to locate the chair before the Prince of Wales' visit to Wyn's former home, now a museum. Penny is also worried about a witness who has disappeared. Penny connects the cases, unmasks a killer, and finds both the chair and the missing person. This cozy contains numerous plot twists and is steeped in Welsh history, populated with full-bodied characters, and surrounded by lovingly described Welsh and Irish locales. Copyright 2019 Booklist Reviews.

For the 100th anniversary of the Armistice that ended World War I, Emyr Gruffydd, owner of Ty Brith Hall in Llanelen, Wales, is planning a dinner party with an exhibit from the war years. The highlight of the evening will be the unveiling of the Black Chair, a chair presented posthumously to the winning poet, Hedd Wyn, at a national competition in 1917, when the young man had just died on a battlefield in Belgium. Emyr asks Penny Brannigan, owner of the local spa, to plan the event. Everything goes smoothly until the Black Chair is discovered to have been stolen. While the guests wait for the local police detective, Penny comes upon a young waiter who was struck down outside the hall. As she asks questions of a former thief, an art expert, and community members, Penny connects the dots in a complicated plan to steal from the Welsh heritage. With a mystery involving a poet's chair and Irish Travelers, the award-winning author of focuses on the culture of Wales in her latest cozy. The charming characters will appeal to Jane K. Cleland's readers.

In Duncan's workmanlike 10th mystery featuring spa owner Penny Brannigan (after 2018's ), Penny's friend Emyr Gruffydd asks her to help organize a party that Emyr is hosting at Ty Brith Hall in Llanelen, Wales. The highlight of the evening will be a viewing of the newly restored Black Chair, a Welsh national treasure that's making a brief stop at the Hall before continuing on its way to its final installation at the Hedd Wyn museum at Yr Ysgwrn. For the dinner party, which will be "the highlight of the Llanelen social calendar," a platoon of extra staff is hired. After dinner, the guests repair to the library to discover that the Black Chair has disappeared. Minutes later, Penny literally stumbles upon the body of a dying waiter. Her investigations take her to Dublin before she returns in time to curtsey to the Prince of Wales. Readers should be prepared for bizarre motives and even odder coincidences. This one's strictly for series fans and lovers of Welsh history and lore. Agent: Dominick Abel, Dominick Abel Literary. (Sept.)

A dream of deathBerry, Connie

Murder in an Irish villageO'Connor, Carlene

Murder at the mansion: a Victorian village mysteryConnolly, Sheila

Folly: a British murder mystery set in the CotswoldsCameron, Stella