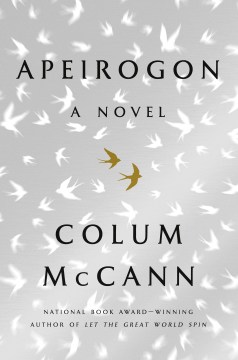 *Starred Review* An apeirogon is "a shape with a countably infinite number of sides," embodying the complexity McCann seeks to express in this tragic and transporting hybrid novel. In his National Book Award-winner, Let the Great World Spin (2009), two women from opposite ends of the social spectrum lost sons in the Vietnam War. Here McCann portrays two fathers, one Palestinian, the other Israeli, each mourning a young daughter who died in the region's persistent, senseless bloodshed. Bassam Aramin and Rami Elhanan are real people, and the stories of how Abir Aramin and Smadar Elhanan were killed, and of how Bassam and Rami became peace activists and border-defying friends, are true. McCann meshes the actual and the imagined in concise, numbered passages totaling 1,001 in homage to the Arabian Nights. Each is exquisite and haunting, many are harrowing, and together they form an entrancing and unnerving associative collage of fact, memory, observation, and invention. He discovers startling connections while pondering weaponry and poetry, migrating birds and explorers, torture and checkpoints, the music of John Cage and Phillip Petit walking for peace on a tightrope over Jerusalem. McCann performs his own epic balancing act between life and art, writing with stunning lyricism and fluent empathy as he traces the ripple effects of violence and grief, beauty, and the miraculous power of friendship and love, valor and truth.HIGH-DEMAND BACKSTORY: Globally best-selling McCann always commands attention and the daring subject and structure of this resounding novel will double its pull. Copyright 2019 Booklist Reviews.

In this latest from the National Book Award-winning and best-selling McCann, the lives of Palestinian Bassam Aramin and Israeli Rami Elhanan do not initially touch. But then Bassam's daughter Abir is killed by a rubber bullet even as Rami's daughter Smadar falls victim to a suicide bombing. After learning of each other's grief, the two fathers reach across borders to work for peace. In geometry, an apeirogon is an imaginary polygon with a countably infinite number of sides, but literature has a way of showing us what's possible.

National Book Award–winner McCann () bases this masterful novel on the lives of two real men working together toward Middle Eastern peace. Rami Elhanan, 67 on the single day of 2016 on which the main narrative takes place, is a graphic designer and Israeli military veteran. In September 1997, his 13-year-old daughter, Smadar, was killed in a Jerusalem suicide bombing. His need for revenge fades when he joins the Parents' Circle, whose members, of many nationalities and religions, have all lost a child in the Israel/Palestine conflict. Nineteen years younger than Elhanan, Palestinian Bassam Aramin is jailed in 1985, at 17, for resisting the Israeli occupiers in Hebron, where he's raised. During his imprisonment, writings by Gandhi, among others, and friendship with one of the Israeli guards convince him of the power of nonviolence. Released after seven years, he helps found Combatants for Peace, which brings Palestinian and Israeli fighters—among them Elhanan's son, who introduces the two men—together for dialogue. The fatal 2005 shooting of Bassam's 10-year-old daughter, Abir, by an Israeli border guard doesn't shake his belief that Israelis and Palestinians share "an equity of pain"; he and Elhanan begin meeting daily, using their daughters' stories to become international advocates for peace. The book's title is a reference to a polygon with a countable but infinite number of sides, and McCann evokes the experience of its protagonists and their region through 1,001 brief numbered segments that incorporate sequences in the men's own voices and interconnect topics including bullet manufacturing, Jorge Luis Borges, and birds. Balancing its dazzling intellectual breadth with moments of searing intimacy, this is a transformative vision of a historic conflict and a triumph of the novelist's art. Agent: Sarah Chalfant, Wylie Agency. (Feb.)

Dark at the crossingAckerman, Elliot

The most beautiful night of the soul: more stories from the Middle East and beyondJaszberenyi, Sandor

In the cemetery of the orange treesTalarigo, Jeff