We are the weather : saving the planet begins at breakfast / Jonathan Safran Foer. 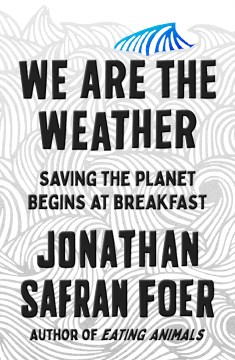 How much of accepting climate change is practical and how much is theoretical? How much of what an individual can do is worthwhile in the face of massive corporate and government apathy? Such existential questions keep novelist Foer (Here I Am, 2016) up at night, after he reads bedtime stories to his children or sits at his dying grandmother's bedside. In a deeply contemplative and artfully creative series of essays, Foer shares his internal dialogues, conflicts and all. A devoted advocate of veganism, Foer, also the author of the nonfiction work, Eating Animals (2010), posits that one of the most effective ways of combating climate change is to eat less meat, dairy products, and eggs. Yet while his moral outrage remains strong, he presents his arguments with a considered objectivity, sharing his own doubts and weaknesses and admitting his personal failure to always practice what he preaches. In his desire to convince others to take action, Foer raises the philosophical bar, which is, perhaps, the most effective way of fomenting sincere and long-lasting commitment to this life-threatening crisis. Copyright 2019 Booklist Reviews.

Sure, we know climate change is a problem, but what are we going to do about it? Leading novelist Foer (), also the author of the nonfiction , urges action now, arguing that it all "begins at breakfast" as we've turned the planet into one giant factory for producing meat.

Foer () provides a global "call to action" in addressing the perpetual planetary climate change crises. According to Foer, 97 percent of climate scientists have reached the conclusion that the planet is warming because of human activities. He argues that popular environmentally conscious actions such as recycling, driving electric cars, and tree planting aren't "high impact" enough to make the changes needed to reduce the human impact on the planet. He believes that we can't save the planet unless we significantly reduce our food consumption of animal products; and, according to his research, animal agriculture is a major contributor to climate change. This book is an argument for a collective act to eat differently—specifically, no animal products before dinner. Foer is not encouraging the "complete" elimination of eating animal products, but suggests that eating as close to vegan as possible before dinner would have a high impact on reducing greenhouse gases caused by mass animal farming. This book provides a well-researched solution for addressing climate change and is highly recommended for all libraries. [See Prepub Alert, 3/17/19.]

In an unconventional but persuasive manner, novelist Foer () explains why taking meaningful action to mitigate climate change is both incredibly simple and terribly difficult. Writing from an intensely personal perspective, he describes the difference between understanding and believing, making clear that only the latter can motivate meaningful action. He argues that the dichotomy between those who accept the science of climate change and those who don't is "trivial," because "the only dichotomy that matters is between those who act and those who don't." Foer makes the case that animal agriculture is the dominant cause of climate change, concluding that "we must either let some eating habits go or let the planet go. It is as straightforward and as fraught as that." While he calls for everyone not to eat animal products before dinner (at the very least), he is not shy about discussing his own hypocrisy, disclosing his lapses back into meat-eating after writing a book-length treatise against it (2009's ). Foer's message is both moving and painful, depressing and optimistic, and it will force readers to rethink their commitment to combating "the greatest crisis humankind has ever faced."

Drawdown: the most comprehensive plan ever proposed to reverse global warmingHawken, Paul

Hot, flat, and crowded: why we need a green revolution--and how it can renew AmericaFriedman, Thomas L.

The future earth: a radical vision for what's possible in the age of warmingHolthaus, Eric

Hot: living through the next fifty years on earthHertsgaard, Mark, 1956-

Falter: has the human game begun to play itself out?McKibben, Bill

The green New Deal: why the fossil fuel civilization will collapse by 2028, and the bold economic plan to save life on earthRifkin, Jeremy