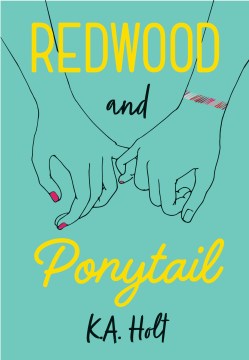 *Starred Review* With her latest novel in verse, Holt returns to the world of House Arrest (2015) and Knockout (2018), this time turning her focus to the story of Kate and Tam. Kate, with her "perfect swinging" ponytail, is next in line to be cheerleading captain, much to the satisfaction of her demanding, ex-cheerleader mother. Tam, tall as a redwood, is a popular volleyball jock whose "hippie" mother and elderly lesbian neighbors help her feel free to be herself. When the new school year brings the two girls together, they form an immediate bond, but it's a friendship that soon feels like something more, and each of them must make sense of their feelings in the face of first love and the pressure of outside expectations. The free verse narration is totally accessible, flowing quick and clear, and Holt plays with form, beautifully highlighting the parallel internal journeys, often achieving something akin to a musical duet. Ultimately, this is a middle-school romance concerned with the thrilling, confusing, world-shifting emotions of that age. In an afterword, Holt writes that this was the book she needed when she was a kid, and all kinds of children will find hope in what, more than anything, is a moving story well-told. Grades 5-8. Copyright 2019 Booklist Reviews.

Seventh grader Kateâ€™s (â€œPonytailâ€) life is largely defined by pressure from her mom to become captain of the cheerleading squad and by her friendsâ€™ similar expectations; less popular, gangly girl Tam (â€œRedwoodâ€) has had a freer upbringing. A friendship with a tinge of rebellion (Kate breaks cheerleader tradition by sitting with Tam at lunch) leads to their holding pinkies but not, for a while, being able to talk about what that means, as Kate struggles with whether or not to claim lesbian identity. The verse novelâ€™s narration, with mostly short lines that emphasize the charactersâ€™ emotions, alternates between Kate and Tam, with some poems juxtaposing their concurrent thoughts or showing conversations between them. Interspersed observations from the gossipy Greek chorus of Alex, Alyx, and Alexx underscore the constant scrutiny Kate and Tam face from their fellow middle-schoolersâ€"though a late exchange with cheerleader friend Becca suggests that their classmates might be more understanding than theyâ€™d thought. The format contributes to an air of drama; Holt takes the girlsâ€™ seemingly small-scale concerns, and their larger implications, seriously. Shoshana Flax January/February 2020 p.90 Copyright 2020 Horn Book Magazine Reviews.

Holt () once again offers keen insight into the social pressures and vulnerabilities of middle schoolers in this novel in verse, which traces the mutual attraction between two seventh grade girls. "Tall as a palm tree" Tam, a jock, is sometimes mistaken for a boy; "with her "perfect/ swinging/ ponytail," Kate resembles "every clichéd cheerleader." Despite their differences, though, they establish a friendship that evolves into something deeper. Conflicts arise when Kate's friends and social-status-obsessed mother disapprove of Tam, and she fears that people will see her as "twisted up,/ not right" because she is gay. Ultimately, she must choose between molding herself into the girl her mother wants her to be and following her own path. The girls' interior monologues, sometimes merging on the page, sometimes visually set apart, effectively show their shared feelings and contrasting perspectives, and the voices of three onlooking students function as a Greek chorus, highlighting transitions in the girls' relationship. In a story thoughtfully formed and eloquently executed, Holt offers affirmation and hope to readers struggling to fit in. Ages 10–14. Agent: Ammi-Joan Paquette, Erin Murphy Literary Agency. (Oct.)