The body in the castle well : a Bruno, chief of police novel / Martin Walker. 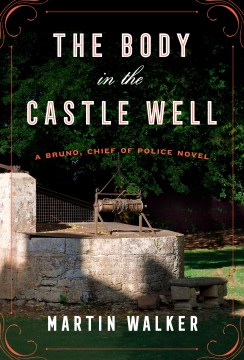 *Starred Review* Bruno Courrèges, municipal policeman for the village of St. Denis and chief of police for the Vézère Valley in France's Dordogne, has an enviable life, one that often starts with a morning horseback ride, continues with croissants at his favorite café, lunch with friends at a picturesque bistro, dinner consisting of locally sourced food from his own farm, and visits from women who are former lovers and still occasional bed partners. The mysteries that come his way don't upset his routine; in fact, Bruno's cozy web of friends and wide interests help solve them, often from something said at the weekly dinners he and his friends take turns hosting. In this, the twelfth entry in the Bruno, Chief of Police, series, Bruno learns from a friend that a young American woman, an art-history student visiting from Yale, has been discovered dead at the bottom of a well, just outside a castle where she'd attended a lecture. The girl's heavy use of opioids complicates the investigation: Was this murder or an accidental fall caused by an overdose? Adding to the interest is the fact that Bruno had known this woman for months (a flashback provides details about their friendly acquaintance). Martin always delivers a live-wire plot, well-realized characters (he's especially adept at character-revealing scenes), and an incredibly varied setting—this time, he throws in some expertise in medieval falconry. Another winner in an always-strong series. Copyright 2019 Booklist Reviews.

After a young American's body is pulled from a castle well, Bruno, St. Denis chief of police in the Dordogne, begins an investigation that leads to the distinguished art historian with whom the woman was studying. Fourteenth in a series boasting nearly 400,000 copies sold across platforms.

In the 12th outing for Walker's Chief Bruno, (after ) we find him enjoying his small-town life in southwest France. Busily planning the town's summer events, he is called away to look for a missing American graduate student who didn't return home from a lecture at the local hilltop castle ruins-turned-park. It's Bruno who notices the cover is missing from the well being repaired and who goes down to look. The deceased young woman was studying French Renaissance art with the famous local art historian, who had been crippled as a Resistance member during the war by a collaborator. Her father is also close friends with the U.S. president, so Bruno and his colleagues receive a lot more scrutiny than usual. Yet he still finds time while solving the murder to plan a Josephine Baker tribute concert, learn about falconry, exercise his horse and basset hound, and cook regional dishes such as a red onion tarte tatin and a navarin of lamb. He also enjoys time with friends and inspects the fine local wines and the famous pate de Perigueux. This will satisfy fans of the series, and also those who enjoy intricate mysteries in unique settings with plenty of local details.

The disappearance of American Claudia Muller, an art history student, drives Walker's satisfying 14th outing for French chief of police Benoît "Bruno" Courrèges (after 2018's ). When Claudia's body is found in a well in Bruno's small town of St. Denis, the preliminary autopsy leads the authorities to believe her death was an accident. Drugs may have been a contributing factor. Claudia was studying with a noted art scholar who was possibly engaged in shady dealings related to his valuable art collection. She was also seen in the presence of a man recently released from prison. Was her death a simple misfortune or something more sinister? The book's main strength is the intrepid Bruno, a horseback-riding and dog-loving master chef whose calm professional practicality pulls the reader into the well-developed, if familiar, crime story. Whether he's preparing a gourmet dinner, enjoying a glass of wine, or solving a murder, it's a pleasure to be in Bruno's company.