Beyond a reasonable stout / Ellie Alexander. 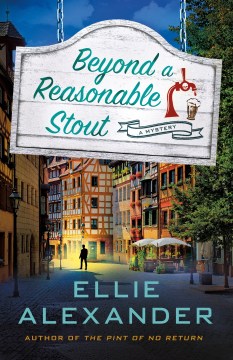 The residents of Bavaria-themed Leavenworth, Washington, are in an uproar due to city-council candidate Kristopher Cooper's campaign promise to make the tourist town dry. Brewer Sloan Krause, who works at nanobrewery Nitro, attends a rally for opposing candidate Valerie Hedy where tempers flare. When Cooper is found dead in the real-estate office of April Ablin, the annoying, self-appointed ambassador of Leavenworth, Ablin begs Sloan to help clear her. Sloan uncovers numerous suspects, from Valerie to various business owners who had a lot to lose if Cooper won the election. Complicating matters, Sloan, who was abandoned as a child, learns that two people she loves have been keeping secrets about her past, prompting Sloan to intensify her search for her birth parents. With its beautifully described small-town setting and seamlessly entwined details about brewing beer, this cozy will appeal to beer lovers everywhere as well as readers who enjoy mysteries highlighting family relationships and independent female main characters. Copyright 2019 Booklist Reviews.

It was a successful Oktoberfest for Leavenworth, WA, the tourist town dependent on the local breweries, pubs, and German village appearance. Election season doesn't look fun, though, because Kristopher Cooper, the incumbent city councilman, is running on a temperance platform. Brewer Sloan Krause and Garrett, owners of Nitro, a small brewery, attend the town meeting, where a number of people argue with Kristopher. But who hated him enough to kill him? When April Ablin, self-proclaimed ambassador for the town, is arrested, the sheriff suggests to Sloan that April needs help and advice. Although she's tangled up in a relationship with her soon-to-be ex and still looking for answers to the mystery of her parentage, Sloan steps in to help April, knowing a reputation for murder won't help the town. Family is an essential element in this character-driven cozy series following . While the primary mystery is solved in each book, the ongoing story line of Sloan's search for her own family story draws readers back. Fans of Ellery Adams's "Books by the Bay" mysteries will recognize Sloan's need for answers.

In Alexander's refreshing third mystery featuring brewmaster Sloan Krause (after 2018's), Oktoberfest is over, and the residents of the quaint German-themed town of Leavenworth, Wash., are getting ready for the winter tourist season and the upcoming local election. City councilman Kristopher Cooper is running for reelection on a platform of prohibition, which would shut down the town's craft beer breweries, its main source of income. One night, Kristopher and April Ablin, the obnoxious town gossip, have a loud argument; the next morning, the councilman is found stabbed to death in April's office. As the number one suspect, April asks Sloan to help prove her innocence. The list of suspects grows as Sloan uncovers evidence that Kristopher was blackmailing townspeople for votes. Meanwhile, Sloan, who never knew her parents, receives a frightening cryptic message about her parents' true identity. Distinctive characters and fun anecdotes about beer and brewing help make this a winner. Readers will want to keep coming back for more.

Survival of the frittersBolton, Ginger

Murder in the mystery suiteAdams, Ellery