Riding a donkey backwards : wise and foolish tales of Mulla Nasruddin / retold by Sean Taylor and the Khayaal Theatre ; illustrated by Shirin Adl. 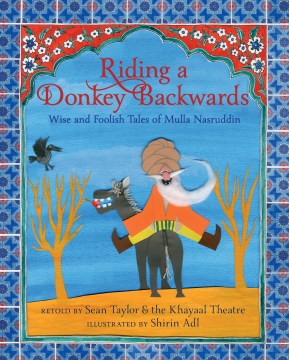 Mulla Nasruddin, as the preface explains, is a pan-Muslim trickster figure who has captivated storytellers for generations and whose actions constantly challenge perceptions, asking readers and listeners to see things in a different light. For example, you may think that Nasruddin is riding his donkey backwards, but in his view, "I'm facing forward. It's the donkey who's facing backwards!" Each of the twenty-one pithy vignettes in this collection imparts a philosophical, ethical, or intellectual conundrum. In "The Other Side," a man asks Nasruddin, standing on the opposite bank of a river, how he can cross to the other side. Nasruddin, with his usual irascible tone, replies, "What a birdbrain...You are on the other side!" The story "When You Are Dead" asks what one would like said about them at their funeral. Nasruddin's answer: "Look! He's moving!" Mixed-media illustrations incorporate texture that makes each vignette an engrossing visual experience. Paper, tissue, felt, yarn, sticks, miniature woven carpets, and beads are combined with other textures that beg to be touched. With his bulbous nose, towering turban, expressive face, four teeth, and fluffy cotton beard that defies gravity, Nasruddin will be sure to elicit giggles from young readers even as they contemplate the logical puzzles he poses. A glossary is appended, but no source notes are provided. Julie Hakim Azzam November/December 2019 p.102 Copyright 2019 Horn Book Magazine Reviews.

Is he a wise man or a fool? Though Nasruddin has many different names, the trickster about whom these stories are told is known throughout the Muslim world. Taylor () and the U.K.-based Khayaal Theatre recount each story in a page or two. In the first, after a thief absconds with Nasruddin's worldly goods, Nasruddin trails him all the way home and climbs into his bed. The thief asks him what he's doing—"I thought we were moving to your house," Nasruddin replies. In another, a begging Nasruddin takes big silver coins in preference to smaller gold coins, though they're less valuable: "If I choose the gold coin," he explains, "everyone will stop giving me money." Diorama-like miniature sets by artist Adl () breathe energy and humor into the tales. The marketplace where Nasruddin begs features hand-formed copper pots, miniature bags of grain, and carpets that appear hand-embroidered. The paper cutout figures wear antic expressions and costumes of cut-out fabric. Young listeners will quickly grasp that often, it's Nasruddin's companions who might be the fools. A glossary of terms (, ) is included. Ages 4–8. (Aug.)

The wise fool: fables from the Islamic worldShahrukh Husain

Goha the Wise FoolJohnson-Davies, Denys
The Barber's dilemma: and other stories from Manmaru streetOguma, Koki

Anansi and the moss-covered rockKimmel, Eric A.

The hungry coat: a tale from TurkeyDemi