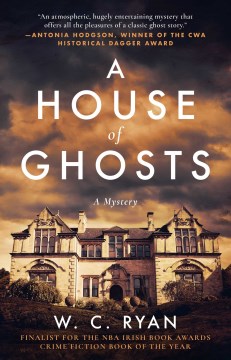 After a trio of well-received WWII crime novels featuring Russian Captain Alexei Korolev, Ryan goes back to WWI in a mystery that combines espionage and treason with spiritualism and ghosts. In 1917, Secret Intelligence Service staffers Kate Cartwright and Robert Donovan are dispatched, along with Kate's former fiancé, Captain Rolleston Miller-White, to Blackwater Abbey, the country home of armaments manufacturer Lord Francis Highmount on an island off the Devon coast, where their assignment is to attend séances during the winter solstice. Mediums Madam Feda and Count Orlov are in attendance, along with friends and family, to try to contact soldiers recently killed, including the Highmounts' two sons and Kate's brother, Arthur. Kate, who happens to possess the ability to see ghosts, and Donovan are on the lookout for spies among those gathered, since plans for secret weapons developed by Lord Highmount's company have recently turned up in Berlin. After a violent climax in the ghostly country home, there are hints of adventure ahead, with a frisson of romance, for Kate and Donovan. A promising mix of supernatural and historical thriller. Copyright 2019 Booklist Reviews.

In 1917, British armaments manufacturer Lord Highmount has lost two of his sons in World War I. He invites a number of people, including two mediums, to a gathering at Blackwater Abbey on an isolated island off the coast of Devon. He hopes to contact the ghosts of his sons. Kate Cartwright, a young woman with her own inherited ability to see ghosts, along with the mysterious Capt. Robert Donovan, attend the party at the request of the Secret Intelligence Service. The SIS suspects that a spy who stole munitions plans will be there. High seas and a dangerous storm trap everyone on the island, but it's not a ghost that cuts the telephone line or wrecks the abbey ferry. The unconventional historical mystery combines spies, ghosts, and wartime in a riveting Agatha Christie-type story that tells of the tragedy of a lost generation. Already published in the UK, this haunting story was a finalist for the NBA Irish Book Awards Crime Fiction Book of the Year. Readers willing to accept the existence of ghosts will appreciate the atmospheric mystery, which seems designed for fans of Charles Todd's "Ian Rutledge" books.

During the winter of 1917, at the height of WWI, various people with hidden agendas travel at the invitation of munitions tycoon Lord Highmount to Blackwater, an island off the English coast, in this lively traditional mystery from Irish author Ryan (). At Blackwater Abbey, Lady Highmount hosts a séance that she hopes will allow her to speak with her two soldier sons who perished on the western front. The Highmounts' guests include a man who calls himself Capt. Robert Donovan, spunky socialite Kate Cartwright, Kate's parents, Kate's slimy ex-fiancé, Count Orlov (a medium), Madam Feda (another medium), and a shell-shocked soldier, whose doctor insists that he hovers on the border of the spirit world. Also present are the spirits of the dead that Kate, a natural though unwilling medium, sees swarming throughout the house. Heightening the suspense is a mysterious stranger, who lurks in the secret passages that honeycomb the house. After a storm isolates the place and violence breaks out, a ripping yarn ensues. The tale exudes a whiff of fusty melodrama in places, but this is a quibble. Agatha Christie fans will have fun.

The 7 1/2 deaths of Evelyn HardcastleTurton, Stuart

Silence for the deadSt. James, Simone