To the land of long lost friends / Alexander McCall Smith. 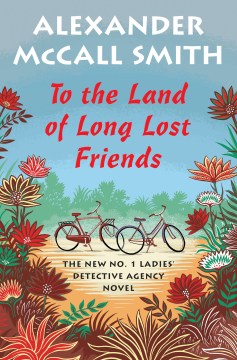 *Starred Review* Clever deceptions form the backdrop of this twentieth novel in the massively popular No. 1 Ladies' Detective Agency series. Readers return to Botswana, where the wise Precious Ramotswe solves the sticky situations people bring to her in the building that is part office, part car-repair garage. Precious also contends with the comically passive-aggressive help of her overly proud sidekick assistant, Grace Makutsi, and the almost completely useless help of part-time detective and all-round goof-off, Charlie. It starts with a wedding, where Grace reconnects with an old friend who has a problem: her once-close daughter, who works in the Botswana Diamond Sorting facility [Facility?], now refuses to have anything to do with her. As Precious and her team try to speak with the daughter, their suspicions grow that some of the diamonds may be making their way out of the sorting office. The most intriguing subplot belongs to Charlie, who wants to marry a wealthy young woman but can't afford the bridal price of cattle, until her brother invites him into a sketchy moneymaking scheme. The plots develop slowly, with most of the novel given over to long conversations and various characters' musings; these frequent detours may annoy new readers but will thoroughly delight longtime fans of the series. Copyright 2019 Booklist Reviews.

Mma Ramotswe tries to help an old friend with a difficult daughter, Mr. J.L.B. Matekoni tries to assist a client who wants to throw his own no-good brother out of the house, and Charlie's girlfriend, Queenie-Queenie, seems to be falling for Fanwell.

Smith's winning 20th No. 1 Ladies' Detective Agency novel (after 2018's ) opens at a wedding, where Mma Ramotse, "doyenne of private investigators in Botswana (not that there were any others apart from her assistant, Grace Makutsi)," thinks she sees a ghost. The ghost is in fact an old friend, Calviniah Ramoroka, whose death was falsely reported in a newspaper years before. Mma Ramotse and Calviniah later meet for lunch, and Calviniah confides that her daughter, Nametso, who works as a diamond sorter in Gaborone, has suddenly started ignoring her. When Mma Ramotse investigates, she discovers that Nametso is driving an expensive car, which provides a key clue to explaining the young woman's behavior. Meanwhile, agency assistant Charlie receives a surprising proposal from his girlfriend, Queenie-Queenie , and Grace, with Charlie's help, looks into the case of an errant husband, which is more complicated than it appears. As usual, the warm, humorous interactions among the characters count more than the detecting. Smith's humanity shines throughout. Agent: Robin Straus, Robin Straus Agency. (Oct.)