One day : the extraordinary story of an ordinary 24 hours in America / Gene Weingarten. 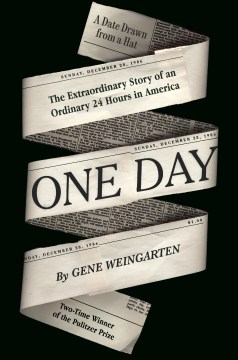 *Starred Review* Pulitzer Prize winner and Washington Post columnist Weingarten had strangers pick a date out of a hat so that he could chronicle the news events of an ordinary day in America: December 28, 1986. As these series of episodic accounts show, there's no such thing as an ordinary day—especially when a persistent reporter digs behind the headlines to uncover detailed backstories and follows through to update accounts of individuals whose lives were changed that day. Weingarten relied on original articles, subsequent reporting, ensuing investigations, court transcripts, and, whenever possible, current interviews with principal characters. The engaging recaps range between 10 and 40 pages, and are arranged chronologically, based on the approximate time the action started (12:01 a.m. through 11:55 p.m.). Topics include crime, disaster, romance, heartbreak, medicine, politics, music, and sports. While some luminaries make appearances (Ed Koch, Jerry Garcia), most of the people Weingarten covers were private citizens before some newsworthy happening launched their names onto the front page of a newspaper. Everybody loves a good story, especially when it's told by a master storyteller. This collection should have wide appeal, whether read straight through, cover to cover, or dipped into for an occasional article. Copyright 2019 Booklist Reviews.

Pulitzer Prize-winning columnist Weingarten () probes a day in the life of America, chosen at random, to illustrate that there is no such thing as "an ordinary day." He settles on Sunday, December 28, 1986, which he at first deemed inauspicious, since Sundays, and the period between Christmas and New Year's, typically yields little in the way of news. Walking through the events that transpired on that day, in chronological order starting at 12 a.m., Weingarten discovers fires, murders, medical breakthroughs, racial strife, and AIDS. The author mined newspaper and TV accounts and substantiated the stories by interviewing the primary individuals still alive to flesh out their headlines, as well as others affected by the events. All happenstances continued to reverberate in surprising and often pivotal ways. The technological and scientific gains accomplished in the space of a few decades are also made plain, and the mid-1980s are evoked with just a twinge of nostalgia. The results of this fascinating, well-researched narrative are conveyed with immediacy, insight, and humor. A solid choice for all readers.

A nondescript day in the 1980s yields unsung but riveting stories in this fascinating journalistic fishing expedition. columnist Weingarten () picked a random day to investigate, winding up with Dec. 28, 1986: a slow-news Sunday that still yielded plenty of mayhem, oddball happenstances, and sociological watersheds. Among the events: a murder enabled a medical miracle; a rash of weather vane thefts entwined with a campus social justice crusade; a married man started down the path to womanhood; a maimed child began a long struggle to fit in; NewYork's mayor Ed Koch weathered racial turbulence; and the Cold War fizzled out for a group of Soviet refugees returning home. Drawing on present-day interviews with principals, Weingarten's reportage gives these incidents and their legacies immediacy and freshness, conveyed with punchy, evocative prose ("David was short, slight, and coarse-featured, with a feral, hunted look and an almost imperceptible hitch in his walk owing to a pin in one leg from a motorcycle accident," he writes of a protagonist in an Indiana noir saga who told detectives he was "about 90 percent sure" he did not commit a grisly double murder). The result is a trove of compelling human-interest pieces with long reverberations.

I thought my father was God and other true tales from NPR's National Story ProjectAuster, Paul, 1947-

The American spirit: who we are and what we stand forMcCullough, David G.

Listening is an act of love: a celebration of American life from the StoryCorps ProjectIsay, David

Somebody with a little hammer: essaysGaitskill, Mary, 1954-

Boom!: aftershocks of the sixties and beyondBrokaw, Tom

Thick: and other essaysCottom, Tressie McMillan