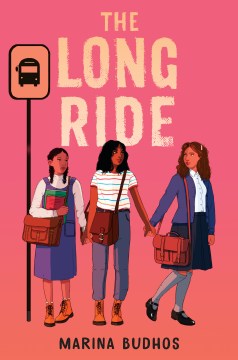 "Twelve is the best and twelve is the worst," begins Jamila's narration, a nod to Dickens, revived for her 1970's world. For Jamila and her best friends, Josie and Francesca, all mixed-race tweens living in the same middle-class Queens, New York, neighborhood, middle-school growing pains are complicated by a busing policy implemented in their community. Budhos gracefully balances the surrounding complex issues of race, class, and equity, without losing focus on the small moments (nascent crushes, perfect outfits) that dominate the lives of her young protagonists. Queens itself plays a quiet but significant part—known as a bastion of diversity, it's still not immune to segregation. Save for descriptions of Peter Pan collars and landlines, many of the sentiments and scenarios feel almost entirely contemporary, and they'll resonate with a wide audience while adding context to still-contentious debates about the legacy of integration policies. For fans of the tone and drama of Rebecca Stead's Goodbye Stranger (2015) and the historical lens of Meg Medina's Burn Baby Burn (2016) or Steven B. Frank's Armstrong & Charlie (2017). Grades 5-8. Copyright 2019 Booklist Reviews.

It's 1971, and the "grand new experiment" of school integration and busing means that twelve-year-old narrator Jamila, along with her best friends Josie and Francesca, will be starting junior high across town. Having been made to feel like outsiders in their predominantly white Queens, New York, school and neighborhood, the mixed-race tweens are excited to finally "fit in." But circumstances divide them, and the reality of their day-to-day experiences is not what they had expected. Jamila's narration provides the voice and perspective of an authentic-sounding soon-to-be teenager who must navigate transitions, friendships, school crushes, cliques, and family expectations. Through short sentences and straightforward text, Budhos explores nuanced conflicts; although the main characters experience microaggressions and racism, for example, there's also a need for them to acknowledge their light-skinned and class privileges at their new school. An appended author's note provides more details: "When we think of integration, we usually think of the iconic images of the National Guard accompanying nine students to school in Little Rock, Arkansas, or of black children being bused into white neighborhoods. Yet the story is much more complex—and it is ongoing." This novel serves as a gateway for readers to learn about the issues of desegregation busing plans in the U.S. and the influence of various adults, and government decisions, in multiracial childhoods. sujei lugo September/October p.81 Copyright 2019 Horn Book Magazine Reviews.

In this autobiographical novel, Budhos () takes a close look at how 1971 integration efforts in Queens affect seventh graders from a predominantly white neighborhood when they are bussed nearly an hour away to a junior high in an underserved community. Jamila, who lives with her white mother and Barbadian father, is used to being regarded as black, as are her mixed-race friends Josie and Francesca. But in the halls of JHS 241, where Jamila feels she can finally blend into the mix of skin tones, she is surprised to be called a "white girl" and criticized for her blossoming relationship with John, a black boy. Bolstered by a warm family life, Jamila copes with the emotional turbulence of being 12 and trying to fit in, along with the larger struggles of a new environment and the swelling undercurrent of anger that occurs both at school and in her own community. Budhos creates a cast of sympathetic and credible characters—both adults trying to do the right thing and children caught in the middle of a social "experiment"—in this compassionate and thoughtful depiction of families grappling daily with the inequities of a changing society. Ages 10–up. (Sept.)