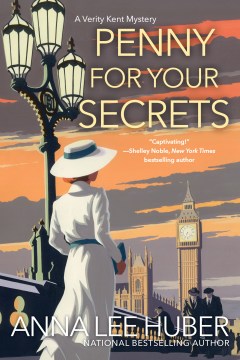 *Starred Review* No sooner are Verity Kent and her dashing but troubled husband, Sidney, back from solving a mystery in Belgium (Treacherous Is the Night, 2018) than they are confronted with one at home in London. Verity's flighty friend Ada is accused of doing in her husband, and no wonder, as she threatened to kill him in full view of a society dinner party earlier that evening. Ada doesn't appreciate it when, instead of dropping everything to help her, Verity and Sidney also probe the disappearance of a young woman of lesser circumstances. The two situations turn out to be linked—both by the people involved and by the unending sense of despair that drags at post-WWI London and that haunts Sidney, a guilt-ridden former army officer. Touching details of the Kents' struggle to overcome Sidney's anguish add to the stellar mystery here, making this a great read for fans of the series and for all who enjoy Downton Abbey–era fiction, a timely read-alike right now, with the Downton movie in theaters. Copyright 2019 Booklist Reviews.

By September 1919, Verity Kent is no longer an agent for the Special Service, and her husband, Sydney, has been demobilized. The young couple is still trying to find their footing after five years apart. Parties, jazz, dancing, and drinking help people in their social class forget their memories of war, but Verity is bored after her service years of adventure. When Lord Rockham is found dead after his wife, Ada, threatened him with a gun at a dinner party, Verity investigates. The Kents are heroes after capturing spies, so Scotland Yard works with them. They're on their own when a friend asks them to look into the suicide of her sister. Soon, Verity suspects the two deaths might be related in a larger scheme involving British politics. In the follow-up to Treacherous Is the Night, Huber focuses on characters who are struggling with postwar memories, depicting the upper-class life more typical of Downton Abbey than books by Charles Todd or Jacqueline Winspear. Readers looking for atmospheric mystery set in the period following the Great War will savor the intricate plotting and captivating details of the era.

In Huber's action-filled third Verity Kent mystery (after 2018's ), former British Secret Service agent Verity is still adjusting to her post-WWI life and trying to rebuild her marriage to Sidney after a three-year separation. At a London dinner party, the Kents are shocked by the reckless behavior of Verity's friend Ada, Lady Rockham, who finds a pistol on her chair and jokes that she might as well shoot her husband with it. Her joke backfires when Lord Rockham is shot to death that very night. Meanwhile, an ex-MI5 colleague of Verity's, Irene Shaw, asks Verity to look into the death of her half-sister, Esther. The police say Esther's murder was a robbery gone wrong, but the only things missing are letters from French cousins. Verity comes upon a clue in Esther's journal that links the two unrelated deaths together by the most unlikely event—a wartime shipwreck in which the entire crew disappeared without a trace. Huber offers a well-researched historical and a fascinating look at the lingering aftermath of war.

A duty to the deadTodd, Charles, (Joint pseudonym)

In Farleigh Field: a novel of World War IIBowen, Rhys