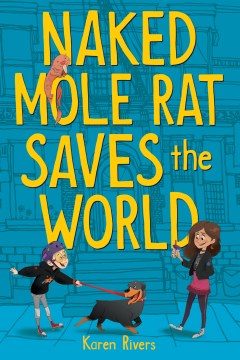 *Starred Review* Rivers (You Are The Everything, 2018) threads rich veins of metaphor and personal transformation into this tale of preteen trauma and recovery. Born prematurely and compared to a naked mole rat by her fond but seriously agoraphobic single mom, kit-with-a-small-"k" reaches age 11 small of stature, bald from alopecia, and often mistaken for a boy. Having cut ties with one friend, Jackson, who deals with the departure of his own dad by showing her documentary proof of her long-gone father's death and kept in a holding pattern with another, Clem, who is pretending to be all right but has been saddled with lingering headaches and depression since a serious fall, kit is short on confidantes when a panic attack temporarily turns her into a small, wrinkled rodent. Along with folding in this whiff of fantasy (kit's not the only character here who, at least seemingly, has an animal alter ego), Rivers handles all the domestic and interpersonal drama with a light touch that keeps things from turning soapy. kit turns out to be a steady, resolute protagonist—as she rightly affirms, naked mole rats may be homely but in several ways they are "superheroes" of the animal world. Readers will come away admiring her knack for resolving issues and conflicts. Grades 4-7. Copyright 2019 Booklist Reviews.

Kit and Clem have a well-oiled friendship that includes Clem's twin brother Jorge and another friend, Jackson. It all starts to unravel, however, when a shocking event occurs. Clem, part of a family of acrobats, suffers a serious injury while performing on a reality TV show. Kit's reaction to this news is to morph (involuntarily and temporarily) into a naked mole rat. It's a bold inciting incident-and it's only the beginning of the off-kilter action and widespread anxieties of this novel's world. The jaunty, cartoonish book cover gives no hint of the darkness within. Kit's mother, a former singing sensation, lives with constant fear due to a mental illness. Kit herself lives with alopecia universalis (congenital baldness). There's a burglar wearing a Batman mask loose in the neighborhood. Clem and Jorge discover that their grandfather died at Jonestown. Kit finds out the true identity of her father. The story is witty and stylish with ample quirky insights, but also breathless, with italic-studded dialogue amping up the pace. Reading it is like flitting around the internet, perching briefly on odd websites-obscure animals, unusual neuroses, strange afflictions, cults, peculiar crimes. Sarah Ellis November/December 2019 p.97 Copyright 2019 Horn Book Magazine Reviews.

Eleven-year-old kit was so tiny when she was born that her single mother deemed her "too small for capital letters." Since then, she's been told two things about that day: diagnosed with alopecia, she "looked like a naked mole rat," and her birth saved her mother, who suffers from acute anxiety. In Brooklyn, kit resents her mom's inability to leave home and the savior role her mother has thrust upon her ("kit" stands for "keep it together"), especially after her best friend, Clem, is hurt performing on television with her acrobat family. This event changes both girls: Clem hides the secret of how she fell, and kit believes that she turned into a naked mole rat when she witnessed the tumble. The story picks up a year later, and both friends are still hiding their secrets. Together, they must find the courage to confront difficult truths. Rivers () realistically portrays the challenge of living with anxiety and the pressures of family responsibility. Complex and moving, this story takes an unvarnished look at what it means to be true to oneself as well as loved ones. Ages 8–12. Agent: Jennifer Laughran, Andrea Brown Literary. (Oct.)

One for the MurphysHunt, Lynda Mullaly