Acid for the children : a memoir / Flea. 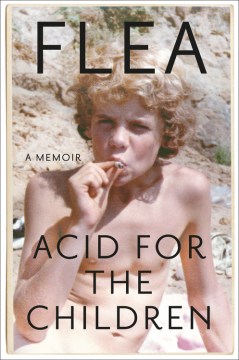 Red Hot Chili Peppers bassist Flea was born Michael Balzary in Australia. When he was four, his family moved to Rye, New York. His mother later left his father for Walter, a volatile yet loving hippie musician who introduced Flea to the rapture of playing music and moved the family to Los Angeles in the 1970s. Flea was a shy boy who loved books, jazz, and smoking pot. After meeting future bandmates Anthony Kiedis, Hillel Slovek, and Jack Irons in high school, he started doing a lot more drugs, making music, and generally being as much of a freak as possible. Flea is a surprisingly good writer and writes in bursts of memories, detailing both pivotal and mundane moments in short chapters (often ending with "that shit was crazy" or a similar sentiment) with equal parts pathos and humor. This is not an RHCP tell-all: the book ends with the band's first-ever live performance. Rather, RHCP fans or not, readers will find a unique coming-of-age memoir that's also an ode to books, music, and performing. Copyright 2019 Booklist Reviews.

Celebrated bassist and cofounder of Red Hot Chili Peppers, Flea here relates the coming of age of a young musician, focusing on the crucial 1970s and 1980s in Los Angeles, where he sought refuge from his chaotic family life with a group of outlier musicians, artists, and junkies, partying and committing petty crimes until music became his salvation. With a 400,000-copy first printing.

Rock bassist Flea, of the Red Hot Chili Peppers, recalls his adolescence in this sensitive, well-written coming-of-age memoir. Flea was born Michael Peter Balzary in 1962 in Australia to a customs official father and a mother who never relished the traditional role of wife and mother. The family moved to New York for a job opportunity, but by the time Flea was seven, his conventional family fell apart. He and his older sister were shuttled off to Los Angeles to live with his mom's new hippie jazz musician boyfriend. Perhaps as a result of this family fissure, Flea admits that he has often felt out of sync with others. But this is also a memoir about friendships as Flea lovingly remembers those with whom he did connect, such as his first best friend, Stephen, with whom he spent hours reading. In high school, Flea found a kindred spirit in Anthony Kiedis, and the two embarked on drug-fueled adventures before forming the Red Hot Chili Peppers. Readers will find much to relate to in Flea's life story and will hope that this isn't the only entry in his writing career. [See Prepub Alert, 5/5/19.]

The Wrecking Crew: the inside story of rock and roll's best kept secretHartman, Kent

Let's go (so we can get back): a memoir of recording and discording with Wilco, etc.Tweedy, Jeff, 1967-