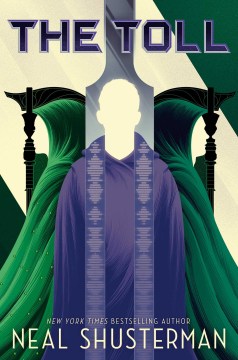 After the great disaster that closed out Thunderhead (2018), the second volume in Shusterman's acclaimed Arc of a Scythe series, the postmortal world is in chaos. A legion of scythes are truly, permanently dead; the corrupt Scythe Goddard has claimed the title of High Blade and is amassing unprecedented power; and the sentient Thunderhead, the cloud that keep society running, has gone silent, speaking only through one chosen ally who becomes a near-religious figure in the eyes of some. Previous volumes focused primarily on Citra and Rowan as they became Scythes and questioned the laws of their society; as this series ender opens, they are absent, and the narrative sprawls through time and place, connecting readers to characters old and new. Shusterman slyly nods to the political and social issues in our world as he explores the triumphs and failings of his. Though this finale occasionally buckles under the weight of its potential, there's still nothing else like it out there.HIGH-DEMAND BACKSTORY: Scythe (2016) was a Printz Honor Book, and this best-selling series has asked big questions and garnered a bigger following. Readers will want to be here to see how it all ends. Grades 9-12. Copyright 2019 Booklist Reviews.

In this final volume in Shustermanâ€™s dystopian fantasy trilogy (Scythe, rev. 11/16; Thunderhead, rev. 3/18), Scythe Faraday is preparing to sail into the Thunderheadâ€™s blind spot to a small archipelago; now that the scythedom has run off the rails, he is looking for the fail-safe he believes the founding scythes have left behind. Greyson Tolliver, the only person not marked â€œunsavoryâ€ and therefore the only one who can communicate with the Thunderhead (the virtually omnipotent, artificially intelligent, cloud-based guardian of humankind), transforms himself into a mythical figure known as the Toll. Meanwhile, the Thunderhead manages to have Citra and Rowan retrieved from the depths of the Endura wreck and revived from their dead-ish state. They are quickly separated, becoming additional pieces that Shusterman moves around the chessboard as he works through the tangled machinations of the plot, shifting subtly from an emphasis on individual characters to a broader focus on humankind; ethics, politics, race, religion, gender, and sustainability are all contemporary issues woven into the storyâ€™s fabric. The conclusion is surprising and bittersweet, but there is a note of optimism that lingers beyond the last page. Jonathan Hunt January/February 2020 p.98 Copyright 2020 Horn Book Magazine Reviews.

When Citra and Rowan are discovered preserved in the wreckage of Endura, three years after the events of , they awaken to find that megalomaniacal Scythe Faraday is now Overblade of all North Merica and is consolidating power worldwide. Citra must convince the world of Faraday's villainy, while Rowan, universally despised as the destroyer of Endura, must simply survive. Meanwhile, Greyson Tolliver, the only human to whom the nearly omnipotent AI known as the Thunderhead will talk, has become the Toll, spiritual leader to the oppressed Tonist religion, as the Thunderhead secretly works to build something game-changing on the remote Marshall Atolls. Some previously central characters, particularly Rowan, take on smaller roles, while others, including Greyson and a hypercompetent, genderfluid sea captain named Jerico Soberanis, are given space to charm. The stellar conclusion to Shusterman's Arc of a Scythe trilogy is a gripping adventure that never stops building momentum as it refocuses the books on a grander scale. With a surprising amount of humor for the large body count, it elevates and deepens the series with a gently optimistic examination of the fine human line between utopia and dystopia. Ages 12–up. (Nov.)