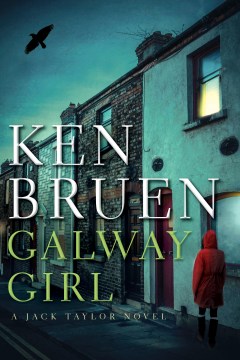 *Starred Review* Bruen's fourteenth Jack Taylor novel (following In the Galway Silence, 2018) brings a storm of retribution. Moments after a young Garda interrupts Taylor's latest grief-fueled drinking binge, he watches helplessly as she's shot dead outside his flat. In the coming days, more Galway cops fall prey to her killer, and Garda veterans suspect that Taylor's presence indicates his involvement. It's not exactly unfounded; Taylor is afflicted with a deadly twist of Murphy's Law that's entangled him in a brow-raising number of murders. Now, Taylor's past has come back to haunt him in the form of a psychopathic trio led by merciless killer Jericho, who's hell-bent on avenging her lover's murder. She's recruited Stapes, Galway's rampaging cop killer and the grasping son of a predator Jack eliminated. When their bloody cat-and-mouse game claims another victim, this one close to Taylor, vengeance turns to pure rage. Bruen's masterful blend of free verse and sharp prose sends readers on a free fall into Taylor's head and evokes a shadowed Galway that meets him with hostility, pity, and grudging respect. Something's shifted in Taylor, and his fans will be forced to endure an excruciating wait to see where it takes him. Copyright 2019 Booklist Reviews.

In this 15th "Jack Taylor" novel (after ), the Irish cop-turned-sometime private investigator is still mourning the murder of his daughter, though he has avenged her death. Meanwhile, someone is systematically killing members of the Garda, and Jack is asked to investigate quietly. Nothing is simple in a Taylor tale, however. Terry Stapleton blames Jack for the death of his father, Amy Fadden tries to frame Jack for the death of her son's killer, and a psycho female named Jericho plots Jack's death while taunting him with cryptic messages. Jack and Jericho take turns attacking each other's friends before a bizarre finale brings some closure. Prolific Bruen is at the top of his inimitable form here with typical first-person narration, one-line paragraphs, free-flowing Jameson, and almost as much blood. Jack is a violent person who seems to attract violence but also has a strong sense of justice and sympathy for individuals in need. For fans of the series and its protagonist, and readers who admire Jack's devious ways of making things right.

In Bruen's superior 15th Jack Taylor novel (after 2018's ), killers stalk PI Taylor, once a member of the Garda, through Galway. Jericho, a femme fatale for whom "everyone was the enemy," cracks the whip on her fellow psychos as they roam the city gunning down members of the Garda to grab Jack's attention. Soon enough it gets personal with the fatal stabbing of a nun known to Taylor. Abrupt violence and plot twists keep the action popping, as Bruen plays his story like a series of brilliant improvisational jazz solos. Cultural references punctuate the narrative—for example, the first paragraph from Hammett's is dropped in as a free-form poem. For the finale, Bruen brings in a new character, the capable and deadly Keefer, once a roadie for the Rolling Stones, thereby balancing the odds so that Jack might live to drink Jameson another day. Bruen reinforces his place as the master of Irish noir.