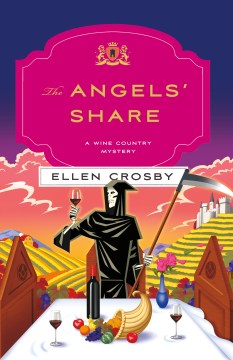 Billionaire media mogul Prescott Avery brings winemaker Lucie Montgomery to his celebrated wine cellar to ask her to sell him her family's store of Madeira, which dates back to James Madison's presidency, and to show her the rare artifact he plans to unveil at an upcoming Freemason meeting. He also hints he is about to reveal a dangerous secret, and he tells Lucie that her father had a secret safe-deposit box. Later that evening, Lucie and her fiancé, Quinn, find Prescott murdered, and the police concentrate on Prescott's immediate family—many of whom had recently argued with him. Suspecting Prescott's secret may have gotten him killed, and using the documents from the safe-deposit box, Lucie follows the clues to Jamestown, Williamsburg, and the Folger Shakespeare Library in Washington, D.C. Lucie also hopes to locate the priceless Madeira, although she suspects her late father either sold or drank it. Entwined with fascinating facts about wine and winemaking, this satisfying addition to the series will please oenophiles. Copyright 2019 Booklist Reviews.

Lucie Montgomery, owner of Montgomery Estate Vineyard, is looking forward to leaving a party when she is approached by her host Prescott Avery. He invites her to join him for a glass of Madeira in his renowned wine cellar and she is too tempted to say no. Surrounded by Prescott's priceless works of art and his astounding collection of documents and artifacts from the founding of the nation, he tells her he thinks that she and her family know the whereabouts of a trove of vintage Madeira from 1809, and that he's willing to pay top dollar for it. Lucie knows nothing of this and tells him so. Within minutes of her leaving him, Prescott is dead and Lucie gets embroiled in the aftermath. Soon she is on the hunt for the missing Madeira, investigating secret safe-deposit boxes, the Jamestown settlement, and the origins and practices of the Freemasons. This well-plotted addition to these award-winning mysteries (after ) will appeal to fans of the series and historical puzzles, as seen in the film .

Crosby's crisp and elegant 10th Wine Country mystery (after 2018's ) finds Virginia vintner Lucie Montgomery attending a party over Thanksgiving weekend at Hawthorne Castle, the home of 95-year-old newspaper tycoon Prescott Avery. When Prescott invites Lucie to see his wine cellar, reputed to be one of the most beautiful wine cellars in the world, she jumps at the chance, but she soon discovers that he wants to know the location of a case of 200-year-old Madeira that he assumes is in Lucie's possession. She has never seen or heard of it. After Prescott turns up dead later that same evening, Lucie places herself at the center of the subsequent investigation. As usual, Crosby supplies plenty of Virginia history, this time focusing on the founders and the signing of the Declaration of Independence, without slowing the main story. She also includes some tantalizing history about wine, particularly Madeira. A family tree linking the Montgomery and Avery families serves as a useful guide, especially during early scenes. The disparate plot threads come together in an exciting and satisfying conclusion. Crosby knows how to keep the reader guessing.