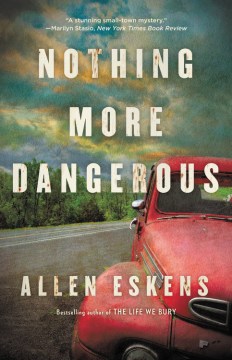 For 15-year-old Boady, it begins when Lida Poe absconds with $168,000 in embezzled cash. No one knows where she has gone until Boady discovers her body with a bullet hole in its forehead. One mystery solved, but another looms: Who killed her? Meanwhile, an African American family, the Elgins, moves in across the road. Mr. Elgin has been sent to manage the local plastics plant, dislodging the former manager, an incompetent good old boy. It being 1976 in a small Ozarks town, the shadow of Jim Crow still looms, and the Elgins are less than welcome. Nevertheless, their son, Thomas, becomes Boady's best friend. Other mysteries soon present themselves, some endangering Boady and Thomas, who land in the thick of the various intrigues. Eskens does an excellent job of weaving these disparate threads together into a fine blend of mystery and coming-of-age novel. The setting is spot-on, the characters are empathetic and well realized, and the plot is clever and compelling, building suspense until a harrowing denouement reveals all. Copyright 2019 Booklist Reviews.

Since the 2014 publication of his light-up-the-sky debut, , Eskens has won two Barry awards and Edgar, Thriller, and Anthony finalist nods. His new work features white high school boy Boady Sanden, ready to break out of his constricted Ozarks life, whose worldview is changed when African American Thomas Elgin moves in across the street and an African American woman who works at the local plastic factory vanishes. A story of a race and class-splintered community in rural America that's more than a mystery and feels like a breakout.

In 1976, Boady Sanden is 15 when African American bookkeeper Lida Poe goes missing from Jessup, MO. Lida worked at Ryke Manufacturing, the largest employer in Jessup. When she disappeared, so did a large sum of money. White teen Boady is more concerned with surviving his first year of high school. A trio of seniors, led by Jarvis Halcomb, plan to pick on the only black girl in school, but Boady trips them up. The Halcombs don't forget, so when Boady befriends Thomas, the son of his new black neighbors, both boys become targets. In a summer of terror, a small group of men from the CORPS (Crusaders of Racial Purity and Strength), led by the Halcombs, set their sights on the families on Boady's country road. This powerful, unforgettable crime novel is a coming-of-age book to rival some of the best, such as William Kent Krueger's Ordinary Grace or Larry Watson's Montana 1948. While Eskens's books are not part of a series, his readers will recognize Boady as an adult character in two of his earlier books, including the award-winning The Life We Bury. This timely stand-alone is a must-read for followers of the best in crime fiction. [See Prepub Alert, 4/22/19.]

Set in Jessup, Mo., in 1976, this tepid coming-of-age story, with a mystery element, from Edgar-finalist Eskens () centers on the relationship between Boady Sanden, an unhappy 15-year-old white boy, and Thomas Elgin, a black boy his own age who moves in with his family next door. Boady and Thomas hit it off after some initial awkwardness when Boady thoughtlessly uses the N-word. The boys' unremarkable escapades include encounters with the opposite sex. Meanwhile, Lida Poe, an African-American woman who worked in the purchasing department of Jessup's largest employer, a plastics producer, goes missing. Rumors circulate that Lida was involved in some financial chicanery and Thomas's father was brought in from Minnesota to try to straighten the business out. Eventually, Boady and Thomas run across a corpse and start playing detectives themselves. The action builds to a climax heavy on clichés. This is no . Hopefully, Eskens will return to form next time.

Let me die in his footstepsRoy, Lori